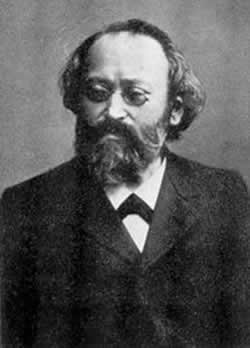 Max Christian Friedrich Bruch (1838 – 1920) was a German Romantic composer and conductor who wrote over 200 works, including three violin concertos.

He was very innovative for his time linking movements,  omitting the Classical orchestral opening to pieces, abandoning the formal structural devices of earlier concertos. His music is passionate and  sensuous.  Melody takes precedence over structure, harmony over formality.  It is wonderful composing, quite beautiful.  You soar along with him on wings.

Many of his best works were inspired in part by old folk songs and melodies.

...As a young man I had already ...studied folk songs of all nations with great enthusiasm, because the folk song is the source of all true melodics---a wellspring, at which one must repeatedly renew and refresh oneself---if one doesn't admit to the absurd belief of a certain party: "The melody is an outdated view."

Although his works are not as free and loosely structured as Debussy's or Ravel's, they are completely lacking in the stultifying rigidity often found in other [long forgotten]composers of the time.  The structure is more like a skeleton on which themes and variations can be hung than a rigid strait jacket.

He did compose symphonies, but his most memorable and emotionally affecting works are for smaller groups of instruments, often quite novel combinations of instruments, and often those containing the violin or viola.  His Violin Concerto No. 1, in G minor, Op. 26 (1866) , for example, is one of the most popular Romantic violin concertos.

He wrote eight pieces for clarinet, viola and piano; a piano quintet, which he began while serving as conductor in Liverpool for the music society of that city; and two string quintets, of which one served as basis for a string octet, written for 4 violins, two violas, a cello and a double bass.

Other works include two concertas for violin and orchestra, - No. 2 in D minor and No. 3 in D minor; and a Concerto for Clarinet, Viola and Orchestra, and many more pieces for violin, viola or cello and orchestra.  Other examples of works written for solo string instrument with orchestra include:

"...I became acquainted with Kol Nidre and a few other songs (among others, 'Arabian Camel') in Berlin through the Lichtenstein family, who befriended me. Even though I am a Protestant, as an artist I deeply felt the outstanding beauty of these melodies and therefore I gladly spread them through my arrangement.

"The two melodies [in Bruch's Kol Nidrei, IO] are first-class. The first is an age-old Hebrew song of atonement, the second (D major) is the middle section of a moving and truly magnificent song "O weep for those that wept on Babel's stream" (Byron), equally very old. I got to know both melodies in Berlin, where I had much to do with the children of Israel in the Choral Society. The success of "Kol Nidrei" is assured, because all the Jews in the world are for it eo ipso."

Some of his works only emerged after the American duo-pianists Rose and Ottilie Sutro died.  They had asked Bruch for a concerto and he duly provided them with one – the  Concerto in A-flat minor for Two Pianos and Orchestra, Op. 88a,  finished in 1912. The score was withdrawn in 1917 and rediscovered only after Ottilie Sutro's death in 1970. The Sutro sisters also played a major part in the fate of the manuscript of the Violin Concerto No. 1: Bruch sent it to them to be sold in the United States, but they kept it and sold it for profit themselves.

“I am a man who throughout his life could not be without hills, trees, and mountain air; who always loved most to be with Nature and amidst nature; ... how deeply is my homeland buried in my heart, the final chorus of Odysseus is proof to you of that.  It came from my heart and has made its way into many hearts”.