William-Adolphe Bouguereau (November 30, 1825 – August 19, 1905) was a French artist, who accordng to Wikipedia painted ‘realistic genre paintings using mythological themes, and classical subjects, with an emphasis on the female human body’.

But his paintings are actually beyond realism, and aimed to capture something of the heavenly in paint.  During his life he enjoyed significant popularity amongst the general public.  Needless to say, however, he was dismissed and scorned by the critics and Impressionists and their supporters, but to have done so misses everything he was trying to capture.  The Impressionists were trying to capture Light, Bouguereau was trying to capture the spiritual in everything ‘mundane’ -  to see heaven in all things – so in some senses their objectives were the same, only the methods differed.  He was a prolific painter – driven one might say.  Throughout the course of his life, Bouguereau executed 822 known finished paintings, although the whereabouts of many are still unknown.

Some art critics were truly cruel in their normal vitriolic way about his paintings, Richard Muther wrote in 1894 that Bouguereau was a man "destitute of artistic feeling .. [who] reveals...in his feeble mawkishness, the fatal decline of the old schools of convention."  But then some of these critics were being paid to promote rival painting schools.  There is little honesty in art criticism, all art critics have their price.

William-Adolphe Bouguereau was born in La Rochelle, France. He seemed destined to join the family business but for the intervention of his uncle Eugène, a Roman Catholic priest, who taught him classical and Biblical subjects. His father was convinced by a client to send Bouguereau to the École des Beaux-Arts in Bordeaux, then, financed by commissions to paint portraits of his uncle’s parishioners, to the École des Beaux-Arts in Paris.  There he was taught ‘painting in the academic style’ whose subject matter was invariably historical and mythological subjects.  Bouguereau won the coveted Prix de Rome at age 26 in 1850.  His reward was a year at the Villa Medici in Rome, Italy, where in addition to formal lessons he was able to study first-hand the Renaissance artists and their masterpieces, as well as Greek, Etruscan, and Roman antiquities. He also studied classical literature, which influenced his subject choice for the rest of his career. 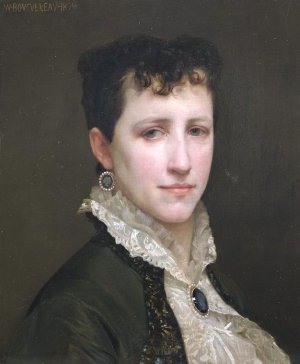 Bouguereau, painting within the traditional academic style, exhibited at the annual exhibitions of the Paris Salon for his entire working life.

So what inspired him?  Boughereau’s paintings are not filled with angst or portraits of unrequited loves, they show a deep love of women and children, love of the human form, a sense of peace at the beauty of life and what is spiritual in man and woman.  There are very few men in his pictures and most of his women are naked, so he was well aware of the importance of both nakedness symbolically and the feminine in achieving spiritual understanding.
“Bouguereau's graceful portraits of women were considered very charming, partly because he could beautify a sitter while also retaining her likeness”.  Or maybe the beauty was all he saw.

Bouguereau was not inspired by poverty or insecurity either.  By the 1860s, his fame had extended to England and he had bought a large house and studio in Montparnasse with his growing income.  He also gained wide fame in Belgium, the Netherlands, Spain, and in the United States, and commanded high prices.  Bouguereau’s career was close to a direct ascent with hardly a setback.  He received many commissions to decorate private houses, public buildings, and churches, which added enormously to his prestige, income and fame. He was also a successful portrait painter and many of his paintings of wealthy patrons remain in private hands.

No, insecurity and humiliation were not needed to inspire him or drugs, or absinthe. 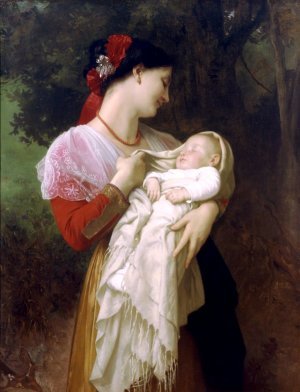 In 1856, he married Marie-Nelly Monchablon and subsequently had five children.  He had no lovers as far as we know.  He had no need.

His life was not without tragedy. In 1877, [when he was 52] both his wife and infant son died.  But in 1896, at the age of 71, he was married for the second time, to fellow artist Elizabeth Jane Gardner, one of his pupils.

Boughereau’s love for women was genuine and sincere, deep and affectionate.  He was not driven [like Picasso or Wagner] by a sort of insatiable sexual appetite that needed women but used them.  He cared about women and I suspect they cared about him.  He used his influence, for example, to open many French art institutions to women for the first time, including the Académie française.

And his love for his fellow man also took practical form.  From the 1860s, Bouguereau was closely associated with the Académie Julian where he gave lessons and advice to art students, male and female, from around the world. Over several decades he taught drawing and painting to hundreds, if not thousands, of students. Many of them managed to establish artistic careers in their own countries, sometimes following his academic style, and in other cases, rebelling against it, like Henri Matisse.

Near the end of his life he described his love of his art: "Each day I go to my studio full of joy; in the evening when obliged to stop because of darkness I can scarcely wait for the next morning to come ... if I cannot give myself to my dear painting I am miserable."