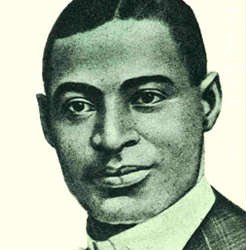 Charles Joseph "Buddy" Bolden (September 6, 1877 – November 4, 1931) was an African-American cornetist and is regarded by contemporaries as a key figure in the development of a New Orleans style of rag-time music, which later came to be known as jazz. Bolden's band was a top draw in New Orleans (the city of his birth) from about 1900 until 1907. At least one writer has labeled him the father of jazz. He is credited with creating a looser, more improvised version of ragtime and adding blues to it.

Bolden's band was said to be the first to have brass instruments play the blues. He was also said to have taken ideas from gospel music heard in uptown African-American Baptist churches. Instead of imitating other cornetists, Bolden played music he heard "by ear" and adapted it to his horn. In doing so, he created an exciting and novel fusion of ragtime, black sacred music, marching-band music, and rural blues. He rearranged the typical New Orleans dance band of the time to better accommodate the blues; string instruments became the rhythm section, and the front-line instruments were clarinets, trombones, and Bolden's cornet.

He left no known surviving recordings, but he was known for his very loud sound and constant improvisation.

Bolden suffered an episode of acute alcoholic psychosis in 1907 at the age of 30.  And in 1907, he became incapacitated by schizophrenia (then called dementia praecox).  With the full diagnosis of dementia praecox, he was admitted to the Louisiana State Insane Asylum at Jackson, a mental institution, where he spent the rest of his life.