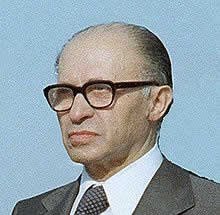 Menakhem Begin, (1913 – 1992) was an Israeli politician, founder of Likud and the sixth Prime Minister of the State of Israel. He is perhaps best known for the signing of a peace treaty with Egypt in 1979, for which he and Anwar Sadat shared the Nobel Prize for Peace.  So why put him here as an explorer or adventurer?  Because his life before he entered politics was one of 'adventure' of a quite horrific kind.

Menachem Begin was born to Zeev Dov and Hassia Biegun in Brest-Litovsk (Brest), a town then part of the Russian Empire which was known for its Talmudic scholars. He was the youngest of three children. On his mother's side he was descended from distinguished rabbis. Begin studied law at the University of Warsaw and graduated in 1935, but never practiced law.

From the start he involved himself in dangerous 'adventures' related to the impending war - a war most Europeans at the time could see coming.  Living in Warsaw, Begin unsuccessfully attempted to smuggle 1,500 Jews into Romania at the end of August 1939. In September 1939, after Nazi Germany invaded Poland, Begin, in common with a large part of Warsaw's Jewish leadership, escaped to Wilno (today Vilnius), then eastern Poland, to avoid inevitable arrest. The town was soon occupied by the Soviet Union, but from 28 October 1939, it was the capital of the Republic of Lithuania. Wilno was a predominately Polish and Jewish town; an estimated 40 percent of the population was Jewish.

During the Holocaust, Begin's father was among the 5,000 Brest Jews rounded up by the Nazis at the end of June 1941. Instead of being sent to a forced labor camp, they were shot or drowned in the river. His mother and older brother Herzl also died in the Holocaust.

As a prominent pre-war Zionist and reserve status officer-cadet, on 20 September 1940, Begin was arrested by the NKVD and detained in the Lukiskes Prison. He wrote about his experience of being tortured in later years. He was accused of being an "agent of British imperialism" and sentenced to eight years in the Soviet gulag camps. On 1 June 1941 he was sent to the Pechora labor camps in the northern part of European Russia, where he stayed until May 1942. Much later in life, Begin would record and reflect upon his experiences in the interrogations and life in the camp in his memoir White Nights and it is from this memoir that I have extracted the observation.

In June 1941, just after Germany attacked the Soviet Union, he was released under the Sikorski-Mayski Agreement. Begin joined the Polish Anders' Army as a corporal officer cadet and was later sent with the army to Palestine via the Persian Corridor, where he arrived in May 1942. Upon arriving in Palestine, Begin, like many other Polish-Jewish soldiers of the Anders' Army, faced a choice between remaining with the Anders' Army to fight Nazi Germany in Europe, or staying in Palestine to fight for establishment of a Jewish state. While he initially wished to remain with the Polish army, he was eventually persuaded to change his mind by his contacts in the Irgun, as well as Polish officers sympathetic to the Zionist cause. In December 1942 he left Ander's Army and joined the Irgun.

He eventually became the leader of the Zionist militant group Irgun, the Revisionist breakaway from the larger Jewish paramilitary organization Haganah. He proclaimed a revolt, on 1 February 1944, against the British mandatory government, which was opposed by the Jewish Agency, an act which eventually led to the founding of the Israeli state.

Depressed by the death of his wife Aliza in November 1982, he gradually withdrew from public life, until his resignation in October 1983. On 3 March 1992, Begin suffered a severe heart attack from which he did not recover.