Abu Hamid bin Abu Bakr Ibrahim (1145-1146 - c. 1221) is better known by his pen-names Farid ud-Din and ‘Attar ("the perfumer").  He was  an Iranian Muslim poet and Sufi, who had an abiding influence on Persian poetry and Sufism.  'Attar is one of the most famous mystic poets of Iran. His works were the inspiration of Rumi and many other mystic poets. Rumi praises `Attar as follows:

Attar has roamed through the seven cities of love while we have barely turned down the first street.

He was from Nishapur, a major city of medieval Khorasan (now located in the northeast of Iran). He was not well known as a poet in his own lifetime and his greatness as a mystic, a poet, and a master of narrative was not discovered until the 15th century.  He is described as a ‘pharmacist’ which in coded language probably means he was also an alchemist.

Attar reached an age of over 70 and died a violent death in the massacre which the Mongols inflicted on Nishapur in April 1221. 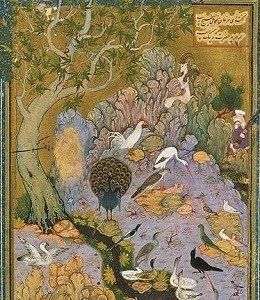 Like all Sufi texts his poetry is full of symbolic meaning and coded passages and contains both short verse and full length stories.  He wrote that when he composed his poems, more ideas came into his mind than he could possibly use – so his practises filled him with inspiration. He also states that the effort of poetical composition was achieved in a state of trance in which he could not sleep.

Scholars have waged a debate for some time about whether all the works that have been ascribed to him are really from his pen.  One reason they cite is that “Some of them indicate a Sunni, and others a Shia, allegiance”.  They clearly do not understand.  At the level of the mystic where one knows the truth, one does not have allegiances.  The politics of division and institutionalised religion have long since disappeared.  They might just as well have said it shows Christian leanings – it may well have done. 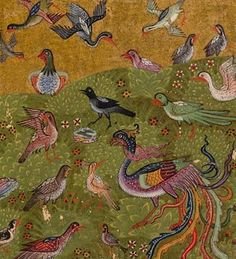 I have used passages from this text a lot on this website.  It is a hugely allegorical text based on the symbolism of birds as well as the various individual symbolic associations of the  various type of birds.

Led by the hoopoe, the birds of the world set forth in search of their king, Simurgh [Phoenix]. So the road to Rebirth.  Their quest takes them through seven Valleys. So this is an allegorical Spiritual path.

In the first valley,  a hundred difficulties assail them. They undergo many trials as they try to free themselves of what is precious to them and change their state. Once successful and filled with longing, they ask for Wine to dull the effects of dogma, belief, and unbelief on their lives.

In the second valley, the birds give up Reason for love and, with a thousand hearts to sacrifice, continue their quest for discovering the Simurgh. 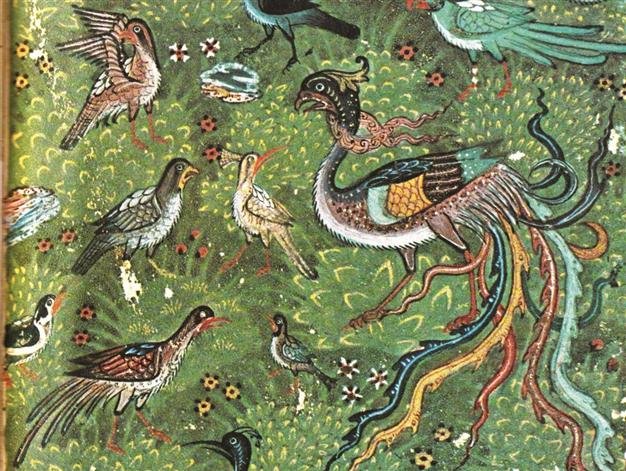 The third valley confounds the birds, especially when they discover that their worldly knowledge has become completely useless and their understanding has become ambivalent [Questioning beliefs]. There are different ways of crossing this Valley, and all birds do not fly alike. So here they have to abandon beliefs.

The fourth valley is introduced as the valley of detachment, i.e., detachment from Desire to possess and the wish to discover. The birds begin to feel that they have become part of a universe that is detached from their physical recognizable reality. In their new world, the Planets are as minute as sparks of dust and elephants are not distinguishable from ants.

It is not until they enter the fifth valley that they realize that unity and multiplicity are the same. And as they have become entities in a vacuum with no sense of eternity [Out of time]. 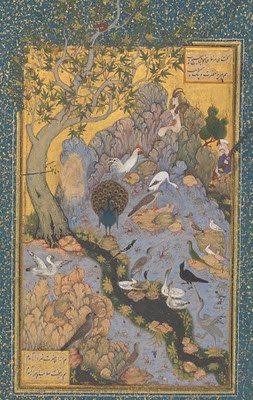 Stepping into the sixth valley, the birds experience extreme sadness and dejection, they feel that they know nothing, understand nothing. They are not even aware of themselves. Only thirty birds reach the abode of the Simurgh. But there is no Simurgh anywhere to see. Simurgh's chamberlain keeps them waiting for Simurgh long enough for the birds to figure out that they themselves are the si (thirty) murgh (bird). The Higher spirit is within them.

The seventh valley is the valley of Annihilation. The present and future lives of the thirty successful birds become shadows chased by the celestial Sun. And themselves, lost – dissolved obliterated – One with the One.

Attar's only known prose work which he worked on throughout much of his life and which was available publicly before his death, is a biography of Muslim saints and mystics. In what is considered the most compelling entry in this book, `Attar relates the story of the execution of Hallaj, the mystic who had uttered the words "I am the Truth" in a state of ecstatic contemplation.  Difficult times to be a mystic and a Sufi. 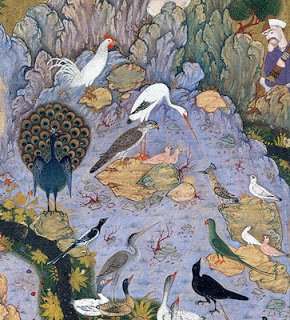 His other works include