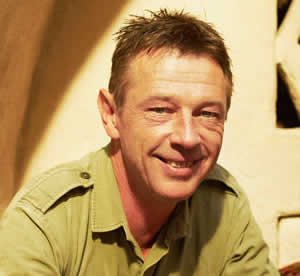 Andy Kershaw is not a mystic, nor is he some spiritual traveller, he is a very likeable ‘personality’ on both UK TV and radio.  But he had an out of body experience when he was young and as such he was worth adding to the website because he is absolutely the last person most people would imagine would have one – simply because he is so ‘down to earth’ and a little intellectual dynamo – the TV version of the human Duracell bunny.

As a teenager he was promoting major rock gigs. He was Billy Bragg's driver and has worked for the Rolling Stones and Bruce Springsteen.  He shared an office with John Peel and presented the Old Grey Whistle Test, the BBC's Music Planet series and Live Aid. He is a passionate music enthusiast and has amassed a record collection that weighs seven tons. He has won more Sony Radio awards than any other broadcaster. He has visited 97 countries and as a foreign correspondent, filed numerous reports for Radio 4. He was also one of the few journalists present during the Rwanda genocide.

The book where his out of body experience is described is called ‘No Off Switch’ and it is his autobiography.  It is a good read.  A ripping yarn.  I quote a review on Amazon

“As well as being jam-packed with musical references from around the world it's important to note that this book is hilarious. I laughed out loud on countless occasions ….  Forget about one of those '50 Things To Do Before You Die' lists. Andy Kershaw could easily knock up a list entitled '50 Wonderfully Random Things That You Never Dreamed You'd Do Until You Did Them'.

In just one three page section entries for such a list include,

Elsewhere you'll find ones such as

All of them are recounted with penmanship of the highest quality.

Such intelligent and engaging writing permeates the whole book. One of my favourite examples of battling the mediocrity of the mainstream is where he informs a bewildered 'I'm a Celebrity Get Me Out of Here!' producer that he wasn't interested in appearing but suggesting he would be if they had a programme focusing on the world's hotspots called 'I'm Not a Celebrity, Get Me in There!'

This is not an arrogant autobiography characterised by a sense of 'look at how amazing my life has been'. It's a very humble, unpretentious, reflective account of an honest, down to earth bloke who's incredibly grateful for opportunities that have come his way. It's Andy Kershaw's unquenchable spirit of curiosity and excitement that makes him want to share what he's discovered with a wider audience. And it's his mastery of the written word that enables him to do so in such an entertaining and inspiring manner.

Rochdale's unrepentant rebel has managed to create his very own subversive text. Subversive in the sense that it makes the reader imagine a world bigger than the one they know, one that's worth exploring, taking risks for and being a fully paid up member of”.