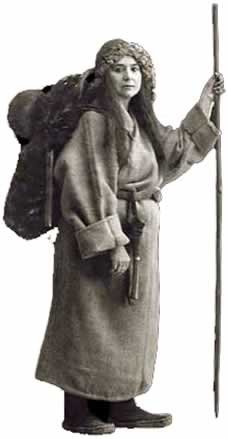 Alexandra David-Néel was born in Saint-Mandé, Val-de-Marne on 24 October 1868, and died in Digne-les-Bains, on 8 September 1969.
She  was a Belgian-French explorer, spiritualist, Buddhist, anarchist, and writer, and a most adventurous, courageous lady.

She visited Lhasa, Tibet, in 1924, when it was forbidden to foreigners. She also travelled all over Tibet, Sikkim, parts of China, India, Vietnam plus many more countries.  And she did it mostly alone.

She learnt the language in Tibet, visited monasteries and questioned the occupants, camped at sometimes extremely high altitudes, lived in caves as part of a retreat experiment for over a year and overall was formidable and greatly respected.  She still is.

David-Néel wrote over 30 books about Eastern religion, philosophy, and her travels. She wrote in French but a large number have been translated into other languages.

Born in Paris in 1868, she moved to Ixelles (Brussels) at the age of six. During her childhood she had a very strong desire for freedom and spirituality. By the age of 18, she had already visited England, Switzerland and Spain on her own, and she was studying in Madame Blavatsky's Theosophical Society. 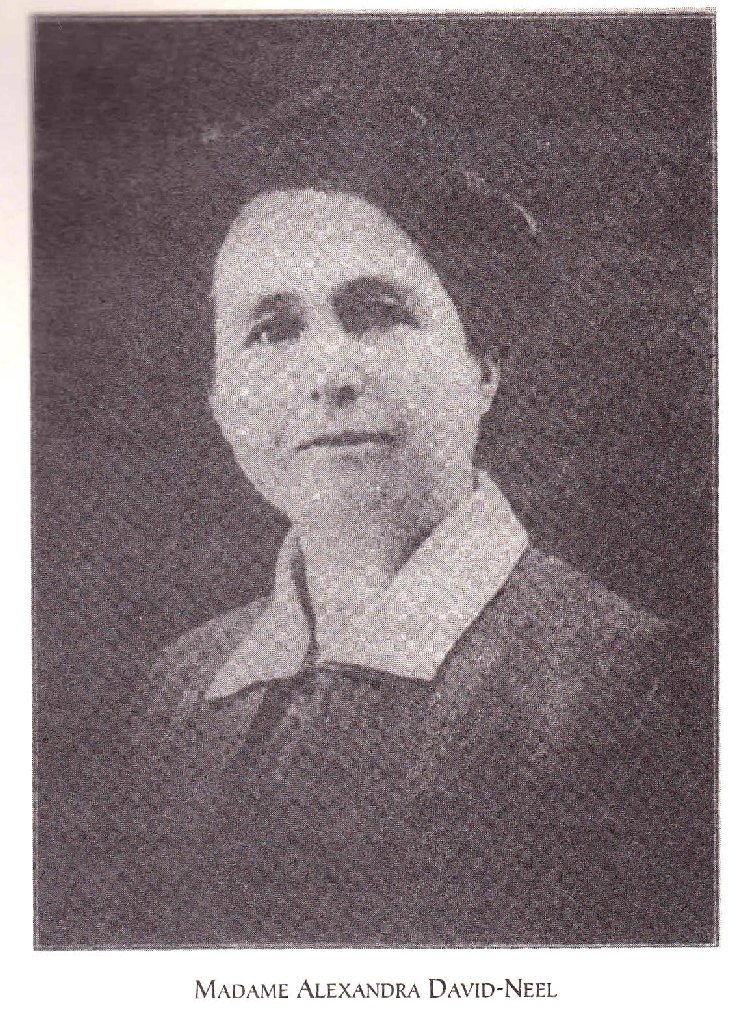 She joined various secret societies - she would reach the thirtieth degree in the mixed Scottish Rite of Freemasonry - while feminist and anarchist groups greeted her with enthusiasm...In 1899, Alexandra composed an anarchist treatise with a preface by the French geographer and anarchist Elisée Reclus (1820-1905). Publishers were, however, too terrified to publish the book, though her friend Jean Haustont printed copies himself and it was eventually translated into five languages.

In 1890 and 1891, she traveled through India, returning only when she was running out of money.

From 1895-1897 she was prima donna with a touring French opera company in Indochina, appearing at the Hanoi Opera House and elsewhere as La Traviata and Carmen.

In Tunis in 1900 she met and lived with the railroad engineer Philippe Néel, marrying him in 1904.

In 1911 Alexandra left Néel and traveled for the second time to India, to further her study of Buddhism. She was invited to the royal monastery of Sikkim, where she met Maharaj Kumar (crown prince) Sidkeong Tulku Namgyal. She became Sidkeong's "confidante and spiritual sister" (according to Ruth Middleton), perhaps his lover (Foster & Foster). She also met the 13th Dalai Lama twice in 1912, and had the opportunity to ask him many questions about Buddhism—a feat unprecedented for a European woman at that time. 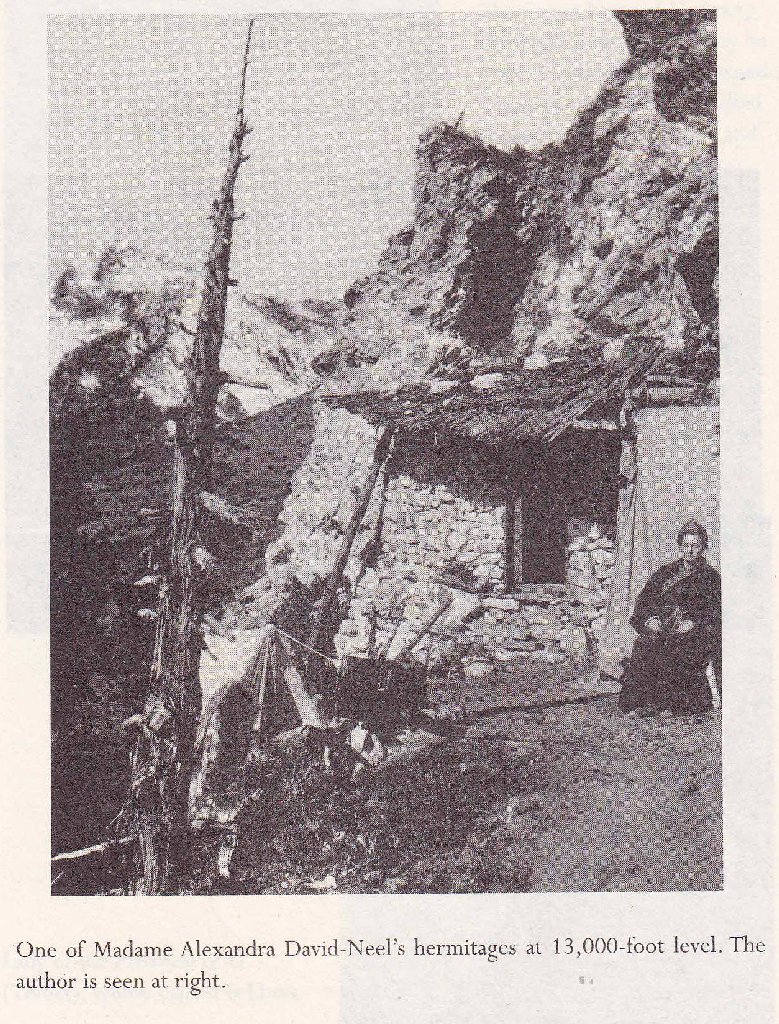 In the period 1914-1916 she lived in a cave in Sikkim, near the Tibetan border,  together with the young (born 1899) Sikkimese monk Aphur Yongden, who became her lifelong traveling companion, and whom she would adopt later. From there they trespassed into Tibetan territory, meeting the Panchen Lama in Shigatse (August 1916). When the British authorities learned of this—Sikkim was then a British protectorate—Alexandra and Aphur were forced to leave the country.

Unable to return to Europe in the middle of World War I, Alexandra and Yongden travelled to Japan.

In Japan, Alexandra met Ekai Kawaguchi, who had visited Lhasa in 1901 disguised as a Chinese doctor, and this inspired them to visit Lhasa disguised as pilgrims. After traversing China from east to west, they reached Lhasa in 1924, and spent 2 months there.

In 1928 Alexandra legally separated from Philippe, but they continued to exchange letters and he kept supporting her till his death in 1941. Alexandra settled in Digne (Provence), and during the next nine years she wrote books. In 1929, she published her most famous and beloved work, Mystiques et Magiciens du Tibet (Magic and Mystery in Tibet). 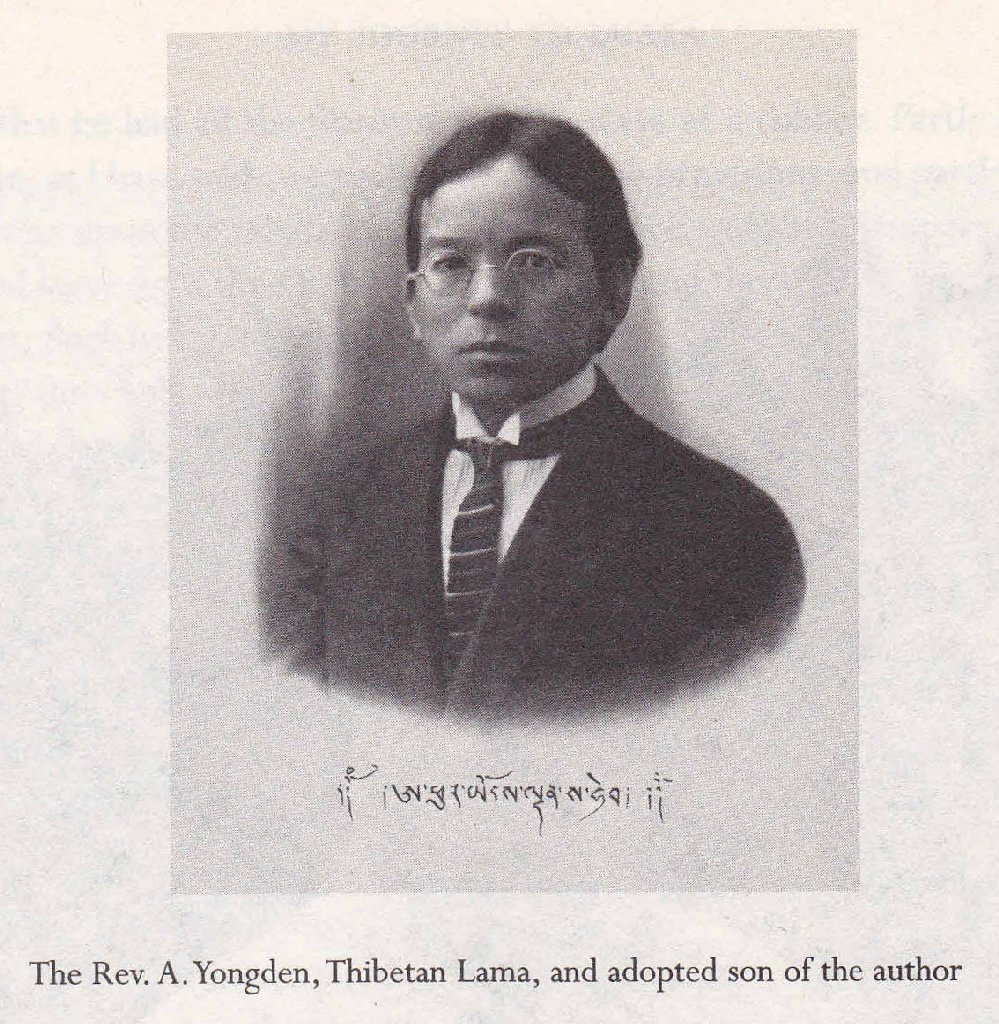 In 1937, Yongden and Alexandra went to Tibet through the former Soviet Union, travelling there during the second World War. They eventually ended up in Tachienlu, where she continued her investigations of Tibetan sacred literature.

While in Eastern Tibet Alexandra and Yongden completed a circumambulation of the holy mountain Amnye Machen.

Alexandra continued to study and write at Digne till her death at age nearly 101. According to her last will and testament, her ashes and those of Yongden were mixed together and dispersed in the Ganges in 1973 at Varanasi, by her friend Marie-Madeleine Peyronnet. 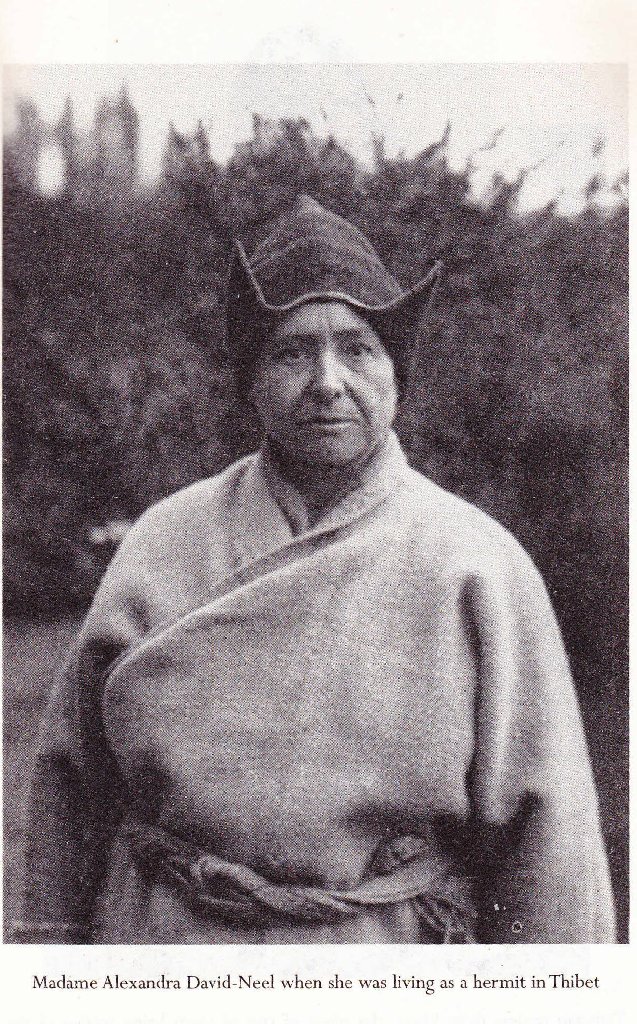