The evidence that severe waves produce infrasound seems to be fairly well established and proven.

Researchers from the USArray Earthscope, for example,  have tracked down a series of infrasonic humming noises produced by waves crashing together and thence into the ocean floor, off the North-West coast of the USA. Potentially, sound from these collisions could travel to many parts of the globe.

Microbaroms are caused by standing sea waves in marine storms.  The  low-level natural-infrasound lies in the frequency range from 0.02 to 10 Hz and they have a period of about five seconds.

They are extremely interesting signals, because they are ‘pulsed’.  The pressure versus time traces of microbaroms appear as an amplitude modulated string of “pearls” or wave packets of 0.2 Hz oscillations with a packet length of from 2 to 5 cycles. An example can be seen in Figure 1 below.

If the propagation conditions are suitable then it is sometimes possible to triangulate on the source region of a microbarom storm using several highly separated infrasonic arrays.

This was done for the tropical storm “Barbara” in the Pacific Ocean of June 20, 2001 by using microbarom azimuth data from Hawaii, Fairbanks and data from an array near Los Angeles. The intersection of the three azimuth directions from the three infrasonic arrays is shown in Figure 4 to be in the Pacific where tropical storm “Barbara” was located. 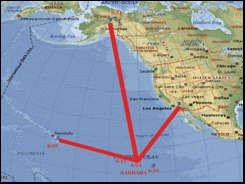 Figure 4. Triangulation on microbaroms from the tropical storm Barbara on June 20, 2001 from Hawaii, Fairbanks and Los Angeles.