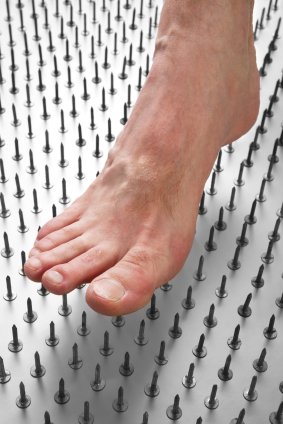 Peripheral neuropathy (PN) is damage or disease affecting nerves, which may impair sensation, movement, gland or organ function, or other aspects of health, depending on the type of nerve affected.

Motor nerves (that control muscles), sensory nerves, or autonomic nerves (that control automatic functions such as heart rate, body temperature and breathing), may be affected. More than one type of nerve may be affected at the same time. Peripheral neuropathies may be classified according to the type of nerve predominantly involved, or by the underlying cause. Where the cause is unknown it is described as idiopathic neuropathy.

There are multiple causes, however, this LINK takes you to the eHealthme web site which lists the 3500 or so pharmaceuticals that are known to cause Peripheral neuropathy.  The list is not anecdotal it was compiled from recognised Adverse Drug Reaction reports submitted to the FDA

Peripheral neuropathy  - its causes and the observations associated with it are treated in the more general section Nervous system diseases.