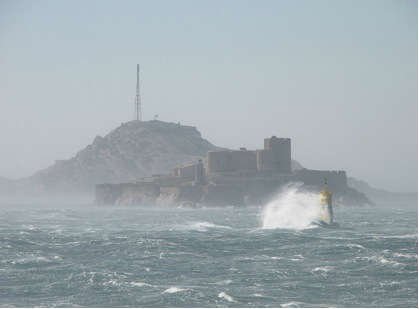 The mistral is a strong, cold and usually dry regional wind in France, coming from the north or northwest, which accelerates when it passes through the valleys of the Rhone and the Durance Rivers to the coast of the Mediterranean around the Camargue region. It affects the northeast of the plain of Languedoc and Provence to the east of Toulon, where it is felt as a strong west wind. It has a major influence all along the Mediterranean coast of France, and often causes sudden storms in the Mediterranean between Corsica and the Balearic Islands.

So in effect the mistral is a MAW, caused by the turbulence created as it is forced through the Rhone valley which surrounded on each side by higher ground – see  Storms and Infrasound.

Further turbulence is also caused  by the presence of the Pyrenees to the south and the Alps to the East.

The mistral reaches its maximum speed not at the narrowest part of the Rhone Valley, south of Valence, but much farther south, where the Valley has widened. Also, the wind occurs not just in the Valley, but high above in the atmosphere, up to the troposphere, three kilometers above the earth. The mistral is very strong at the summit of Mont Ventoux, 1900 meters in elevation. Other contributing factors to the strength and turbulence of the mistral are the accumulation of masses of cold air, whose volume is greater, pouring down the mountains and valleys to the lower elevations. This is similar to a foehn wind, but unlike a foehn wind the descent in altitude does not significantly warm the mistral.

The mistral usually blows from the north or northwest, but in certain pre-alpine valleys and along the Côte d'Azur, the wind is channelled by the mountains so that it blows from east to west. In the Languedoc area, where the tramontane is the strongest wind, the mistral and the tramontane blow together onto the Gulf of Lion and the northwest of the western Mediterranean, thus creating considerable turbulence and can be felt to the east of the Balearic Islands, in Sardinia, and sometimes as far as the coast of Africa.

The mistral is usually a dry wind, and its arrival almost always clears the skies and dries the air. The Mistral helps explain the unusually sunny climate (2700 to 2900 hours of sunshine a year) and clarity of the air of Provence. When other parts of France have clouds and storms, Provence is rarely affected for long, since the mistral quickly clears the sky. In less than two hours, the sky can change from completely covered to completely clear. The mistral also blows away the dust, and makes the air particularly clear, so that during the mistral it is possible to see mountains 150 kilometers and farther away. This clarity of the air and light is one of the features that attracted many French impressionist and post-impressionist artists to the South of France.