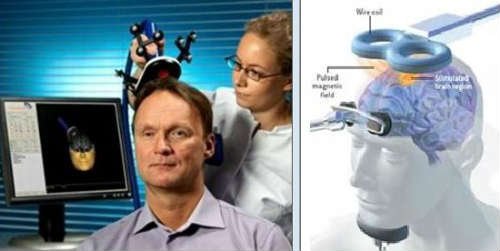 Medical TMSs are the medical version of Transcranial Magnetic stimulators following the pioneering work of Dr Koren and Dr Persinge.   The medical TMSs are more sophisticated manufactured devices but not necessarily more sophisticated in concept of use. Their work was not the only input to the development of these devices.  The principle of inductive brain stimulation with eddy currents has been studied by many people, for example, in 1985 Anthony Barker and his colleagues in Sheffield, England were doing experiments on inducing nerve impulses from the motor cortex to the spinal cord, thus stimulating muscle contractions.

The medical TMSs have the advantage that the magnetic field can be monitored more easily and the equipment is a little more sophisticated.  The real disadvantage with them is however, that not all produce low intensity signals and it is clear that the medical staff using them seem almost unaware of their effects and why they get them.  The high intensity ones, as we have seen have the potential to damage brain cells and are frankly dangerous in the long term.

The devices are being used to treat a range of illnesses that are termed ‘mental illnesses’ or are caused by brain damage such as Parkinson’s disease, Depression, Obsessive compulsive disorder, Schizophrenia, Migraines and Stroke.

The apparatus, placed on or near the head of a person, stimulates the brain with magnetic fields, so the principles of how they are used are much the same as we saw with Dr Persinger’s device.

The main difference as you can see is that there is no helmet, and staff often direct the fields [which must be interesting for the staff given the effects].

Just like Persinger’s device, the medical TMSs use magnetic induction to generate an electric current across the scalp and skull without physical contact.

A plastic-enclosed coil of wire is held next to the skull and when activated, produces a magnetic field oriented at right angles to the plane of the coil. The magnetic field passes through the skin and skull, inducing a current in the brain that activates nearby nerve cells in much the same way as currents applied directly to the cortical surface.

A number of different types of coils exist, each of which produce different magnetic field patterns. For example:

Thus as we can see the design has a big impact on how deep the fields penetrate and thus which specific brain regions are stimulated.  Design variations in the shape of the TMS coils allow much deeper penetration of the brain than the standard depth of 1.5 cm.

Circular, H-shaped, double cone coils and other experimental variations can induce excitation or inhibition of neurons deeper in the brain. The danger here is that though able to penetrate deeper in the brain, they may be resonating some pretty essential organs.  At high intensity, real damage could be done to the amygdala and hippocampus as well as the hypothalamus.  The pulse generally reaches no more than 5 centimeters into the brain.  But this might reach the central limbic system, especially in people with smaller heads.

Unfortunately researchers have found that “the path of the current is difficult to model because the brain is irregularly shaped and electricity and magnetism are not conducted uniformly throughout its tissues”, which is another way of saying they can’t predict effects.

Depending on the apparatus, some medical Transcranial Magnetic Stimulators use magnetic fields on the order of one million times stronger than those used in Persinger's lab.  Given the effects of high intensity fields on people, this is dangerous stuff.  As we have seen, you do not need these high intensity fields, Dr Persinger reports similar effect sizes with his very low intensity apparatus.

In effect, many of the designers and users of these devices do not understand the underlying principle upon which the TMS works.

More than 16 cases of TMS-related seizure – that is epilepsy type seizure -  have been reported in the literature, with at least seven reported before the publication of safety guidelines in 1998, and more than nine reported afterwards.

The seizures have been associated with single-pulse and what is called rTMS. A review of nine seizures associated with rTMS that had been reported after 1998 stated that four seizures were within the safety parameters, four were outside of those parameters, and one had occurred in a healthy volunteer with no predisposing factors.

Besides seizures, other risks include fainting, pains and headache, severe local discomfort, cognitive changes,  psychiatric symptoms  - particularly a risk of mania in depressed patients; and changes to the endocrine system which alter neurotransmitter release and affect the immune system.  There have been changes to the metabolism of some patients.  The following quote also explains the very unpleasant side effects during the ‘treatment’

“It is difficult to establish a convincing form of "sham" TMS to test for placebo effects during controlled trials in conscious individuals, due to the neck pain, headache and twitching in the scalp or upper face associated with the intervention”.

In other words you can’t set up placebo experiments because it is difficult to generate the unpleasant side effects of the real thing.

All this points to dangerous levels of over stimulation and a complete lack of understanding of the underlying principles on which TMS works.

rTMS in the presence of incompatible EEG electrodes has led to in electrode heating and, in severe cases, skin burns

The fact that in some designs the coils are often held by a nurse or doctor also means that varying levels of intensity of field can be experienced.  Strength of signal will differ depending on the distance from the head, so an inexperienced or untrained operator may produce an over dose by putting  the free coils too near the head.

Nevertheless it is clear that low intensity medical TMS, carefully controlled using the right equipment by someone who understands what they are doing does work for some people.