Electromagnetic (EM) radiation  has an electric and magnetic field component which oscillate in phase perpendicular to each other and to the direction of energy propagation [see diagram below].

The electric field and the magnetic field are tightly interlinked, in two senses. First, changes in either of these fields can cause ("induce") changes in the other, according to Maxwell's equations. Second according to Einstein's theory of special relativity, a magnetic force in one inertial frame of reference [An inertial frame of reference is one in which Newton's first law of motion is valid] may be an electric force in another, or vice-versa.

Depending on the circumstances, electromagnetic radiation may behave like a wave or as particles. As a wave, it is characterized by a velocity (the speed of light), wavelength and frequency. When considered as particles, they are known as photons, and each has an energy related to the frequency of the wave given by Planck's relation E = hv, where E is the energy of the photon, h = 6.626 × 10-34 J·s is Planck's constant, and v is the frequency of the wave.

Electromagnetic radiation is a ‘self-propagating wave’ which can be  propagated in a vacuum as well as in a material medium. Most other wave types cannot propagate through a vacuum and need a transmission medium to exist.

Waves - A wave is a disturbance that propagates through space and time, usually with transference of energy.  The wave produced by a transmitter is a sine wave.  To help understand this form of wave we might think of it loosely like the waves in the sea.  They are of a certain ‘height’ a certain ‘shape’ and travel forward with a certain speed or velocity.  Ripples on a pond also follow the same sort of pattern when you throw a stone in.

Waves have frequency and amplitude.  Their frequency is a measure of the number of occurrences of the wave oscillation per unit of time – so for example in our example of the sea wave, if we are standing at a certain point watching them then we might notice that there are 7 waves every minute – a frequency of 7 per minute.  The amplitude [as shown below in the graph] is the vertical distance between the axis of propagation and the peak of the curve – our sea waves might be 2 metres high, our pond wave only a couple of centimetres. 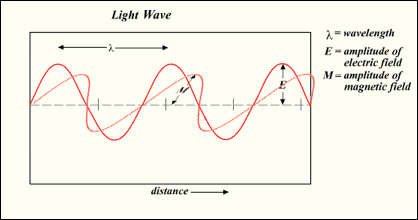 The frequency of an EM wave is its rate of oscillation and is measured in hertz, the International standard unit of frequency, where one hertz is equal to one oscillation per second.

The wavelength is related to the frequency by the formula:

All EM radiation has the same speed [relative to the observer] – which in a vacuum is exactly 299,792,458 metres per second (about 186,282.397 miles per second). The speed of EM radiation depends upon the medium in which it is traveling and its frequency, thus some frequencies do not go this speed in air, for example, and some frequencies won’t go through some things at all but bounce off.  In a medium (other than a vacuum), velocity of propagation or refractive index are measures of the conductivity of a medium. Both of these are ratios of the speed in a medium to speed in a vacuum.

If now look at a wave from the point of view of time – see graph below, the term period is used.  The period is the time for a single oscillation and is the inverse of frequency.   Hence if the frequency of our sea waves is 7 per minute, their period is approximately 8.5 seconds.  The phase [not shown] determines the starting point on the sine wave.

The Electromagnetic spectrum - The electromagnetic spectrum extends from below the frequencies used for modern radio (at the long-wavelength end) through gamma radiation (at the short-wavelength end), covering wavelengths from thousands of kilometres down to a fraction the size of an atom.  It's thought that the short wavelength limit is the vicinity of the Planck length, and the long wavelength limit is the size of the universe itself, although in principle the spectrum is infinite and continuous.
EM radiation is classified into types according to the frequency of the wave and wavelength, these types include (in order of increasing frequency and decreasing wavelength):

·  UVA, with a wavelength of between 300 and 400 nanometres, is considered the safest of the three spectra of UV light, although none of them are actually that safe for humans. UVA light is much lower in energy and does not cause sunburn but it is capable of causing damage to collagen fibers, so it does have the potential to accelerate skin aging and cause wrinkles. UVA can also destroy vitamin A in the skin.

·  UVA induces the production of vitamin D in the skin. Too much UVB radiation leads to direct DNA damages and sunburn. So UVB cannot be used for transmission.

·  UVA rays are the highest energy most dangerous type of ultraviolet light.

[Laser light can in theory exist in any part of the spectrum.  It is coherent light radiation. Two waves are said to be coherent if they have a constant relative phase, which also implies that they have the same frequency.  The term "laser" is an acronym for Light Amplification by Stimulated Emission of Radiation. A typical laser emits light in a narrow, low-divergence beam, with a narrow wavelength spectrum ("monochromatic" light).]