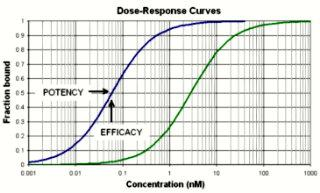 One of the helpful indicators of the dose needed which may be available is what is called the dose response curve which is a simple X-Y graph relating the magnitude of a stressor to the response of the recipient.

The first point along the graph where a response above zero is reached is usually referred to as a threshold-dose.  For most  ‘recreational’ drugs, the desired effects are found at doses slightly greater than the threshold dose. At higher doses, undesired side effects appear and grow stronger as the dose increases. The stronger a particular substance is, the steeper this curve will be.