It is produced in the choroid plexus of the brain. It is drained away by the blood vessels and possibly by the lymph system.  CSF connections with the lymphatic system are a bit more tenuous. There is some discussion at the moment as to whether there may be some relationship between CSF disorders, including hydrocephalus and impaired CSF lymphatic transport.

CSF is found within the dura mater, which is a sac that surrounds the spine and the brain – see spinal cord. The CSF occupies

Thus our central nervous system and our brains are bathed in this fluid. The existence of CSF is used by all anaesthetists.  When they want to knock you out they compare the density of the drug they are going to use with the density of your cerebrospinal fluid. This then tells them how a particular drug will spread ‘in the intrathecal space’ – the same space used by the CSF.

So any drug, endogenous chemical or other stuff that finds its way into the CSF will also find its way to the brain and all the organs of the brain – from the pineal gland to the pituitary gland, from the hydrocephalus to the amygdalas.

Emanuel Swedenborg,  in a manuscript written between 1741 and 1744 unpublished in his lifetime, referred to it as "spirituous lymph".

CSF ‘moves in a pulsatile manner throughout the CSF system with nearly zero net flow’. So it pulses.  A very nice illustration of this pulsing CSF can be found via this link.

CSF pressure varies depending on whether the person is standing up or lying down.  It can increase when coughing. When lying down, the cerebrospinal fluid in the lumbar region is similar to the intracranial pressure.

It has four main purposes 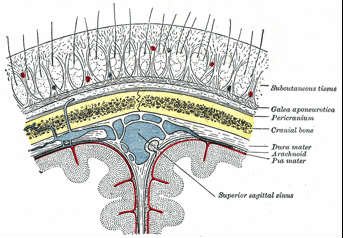 Large amounts of CSF are drained into the blood through arachnoid granulations in the superior sagittal sinus – a vein  - blue cold yin energy.

This corresponds to the crown chakra.

Here we have a picture of the Superior sagittal sinus and its veins showing the route of return of CSF fluid.  As you can see it mirrors the Governor vessel used in acupuncture [Du] and a number of key trigger points.