Butane is a gas with the formula C4H10. It is a highly flammable, colourless, easily liquefied gas.  The most common use of butane is as lighter fuel for a common lighter or butane torch.

Butane gas is sold bottled as a fuel for cooking and camping. When blended with propane and other hydrocarbons, it is referred to commercially as LPG, for liquefied petroleum gas. It is also used as a petrol component, as a fuel for cigarette lighters and as a propellant in aerosol sprays such as deodorants. 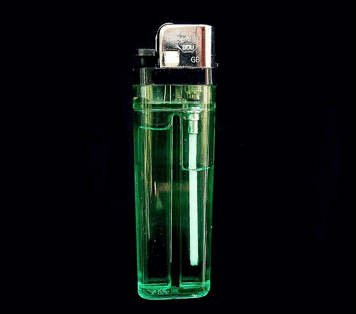 Butane is the most commonly misused volatile solvent in the UK and caused 52% of solvent-related deaths in 2000. Inhaling butane gas can cause:

And in the following extracts from scientific papers we have the proof.

The abuse of household and other commercially available products containing volatile organic solvents is underrecognized. Not infrequently intentional butane inhalation results in high morbidity and mortality. A fatal outcome of butane abuse can be caused by asphyxia, cardiac arrhythmia or trauma. The reported number of cases in which death was the consequence of pure butane inhalation is limited, and in most cases a mixture of propellants was involved. This report covers two cases of sudden death due to the sniffing of a cigarette lighter refill containing butane. Autopsy was followed by toxicological, pathohistological and immunohistochemical analysis. Butane gas was confirmed in samples of blood, urine, brain and lungs by the gas chromatography method - "headspace" technique. Histology showed almost identical changes in the lungs and heart in both cases. The morphology of heart damage on standard H/E stains was of special interest because it displayed all the characteristics of chronic and acute myocardial hypoxia found in the absence of atherosclerotic heart disease. In order to confirm early cardiac death caused by asphyxia due to butane inhalation a panel of immunohistochemical agents was used: Myoglobin, Desmin, Fibronectin, Fibrinogen and CC9.

The Office of the Chief Medical Examiner of Maryland recorded a total of 149 drug abuse deaths of teenagers aged 13-19 years between 1991 and 2006. Of these deaths,

4 (2.7%) by both narcotics and methylenedioxymethamphetamine,

The annual death rate from drug abuse for teenagers increased from 1.4 deaths per 100,000 population in 1991 to 2.7 deaths per 100,000 population in 2006 (chi-square test for time trend, p<0.01). The increase in teenager drug abuse deaths occurred in 1999 and since has remained at a higher rate. Further analysis revealed that the increase in drug abuse deaths was attributable to a large degree to narcotic drugs, particularly heroin/morphine and methadone, and was confined to teenagers residing in the suburban and rural areas.

A case of fatal butane gas poisoning in a young female is presented. Quantitative toxicological analysis showed that the concentration of butane in the femoral blood was 6.8 microl/ml, and isobutane and propane were also identified. Severe congestion of the lungs and deposition of lipofuscin in the myocardium were also observed. We concluded that the cause of death of the victim was due to cardiac arrhythmia induced by the butane gas abuse.

PURPOSE:
To demonstrate the value of poison control data as an adjunct to national drug abuse surveys and a source of data to inform and focus prevention efforts.

METHODS:
National Poison Data System (NPDS) data are collected and compiled in real time by the 60 US poison centers as callers seek guidance for poison exposures. Demographic, geographic, product, outcome, and treatment-site data for the 35453 inhalant cases reported between 1993 and 2008 were analyzed.

RESULTS:
The prevalence of inhalant cases reported to US poison control centers decreased 33% from 1993 to 2008. Prevalence was highest among children aged 12 to 17 years and peaked in 14-year-olds. In contrast to national survey data showing nearly equal use of inhalants by both genders, 73.5% of NPDS inhalant cases occurred in boys, which suggests that boys may pursue riskier usage behaviors. Most cases (67.8%) were managed in health care facilities. More than 3400 different products were reported. Propellants, gasoline, and paint were the most frequent product categories. Propellants were the only product category that substantially increased over time. Butane, propane, and air fresheners had the highest fatality rates. Prevalence for all inhalants was highest in western mountain states and West Virginia, but geographic distribution varied according to product type. Gasoline was a proportionately greater problem for younger children; propellants were an issue for older children.

Furthermore, if you don’t die you can so mess up your mind that you don’t know what you are doing or become violent, dangerous and even permanently psychotic.

Volatile substance abuse (VSA, solvent abuse, 'glue sniffing'), carries a risk of sudden death (some 700 deaths in the UK, 1996-2006). However, mortality data take no account of the social cost of the habit.

From press cuttings we have identified 508 instances (569 individuals: 507 male, median age 25 yr, range 8-51 yr and 62 female, median age 18 yr, range 11-36 yr) where VSA, either alone or together with alcohol/other drugs, was reported in association with criminal or antisocial behaviour that resulted in a criminal conviction or caution.  The frequency of reports decreased from 84 per annum (1997 and 1998) to 20 (2007). The agents reported (17 individuals, two agents) were

The offences cited (most serious crime) were:

Thirty offenders were given life sentences or detained indefinitely under mental health legislation. Reports came from all parts of the UK, although most were from Northern England, Northern Ireland, and Scotland.

There were many reports of recidivists; one 34-year-old male had made 113 court appearances, and had spent approximately nine years in custody. Although there are severe limitations to data derived from press cuttings and notwithstanding that in some cases VSA may have been raised in mitigation, these data provide an additional insight into the problem posed by VSA in the U.K.

Stupid At The Wheel - Inhalants: Butane by Tamara EROWID

[Erowid Warning: Our understanding of the literature is that there is no such thing as safe use of volatile solvents, aerosols and other street inhalants : their psychoactive effects are inseparable from nerve and organ damage. We have chosen to include these reports to help document the real world use of inhalants, but their inclusion is not intended to imply that they are anything but dangerous.]

It was only my second time huffing Butane. (The first time I tried it, it didn't do anything to me.) I was driving and huffing at the same time. The Butane made me pass out, and when I woke up I was in a car wreck. I was on the wrong side of the road, my car and the other car were totaled, and there were ambulances and police cars everywhere. When I first came to, I had no idea where I was or what was going on, and I was in so much pain I couldn't move. It all felt like a really, really bad dream, and I wish it was...

The paramedics put a neck-brace on me, put an 'oxygen-tube' in my nose, put me on a stretcher, and took me to the hospital. I had to get 8 stitches in the back of my head because when I crashed, the speaker in the back of my car flew forward and cut my head all the way to the skull. My collarbone and part of my chest were burned and bruised from my seatbelt (but I'm glad I was wearing it). I wasn't hurt very seriously, but I was lucky.

I found out that the other car was being driven by a 17-year-old girl, and her little brother had been in the passenger seat. They didn't die, but they were hurt worse than I was. I felt so bad, and so stupid. I never meant to hurt anybody...