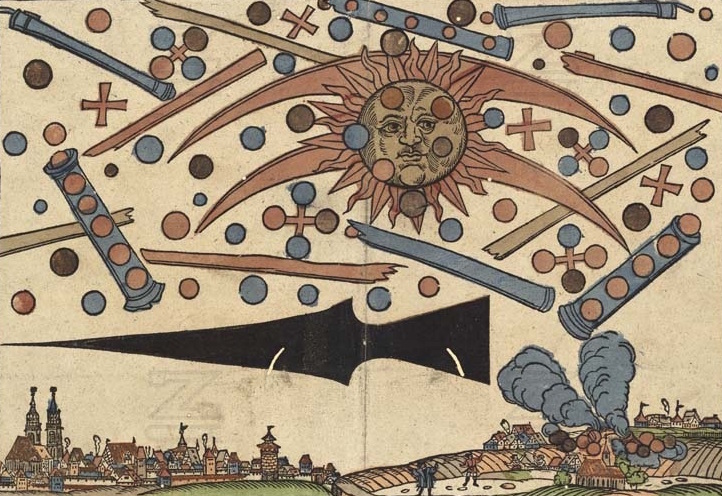 Many of the observations collected by Charles Fort in his books and Jacques Vallee and Chris Aubeck in their book Wonders In The Sky - Unexplained Aerial Objects From Antiquity To Modern Times describe events in the sky which appear to be of wars that took place between rival UFOs fighting for the rights to own our planet.  The majority appear to have taken place in the 1100s and 1200s, although other skirmishes have taken place.

Although observations this long ago are less reliable than perhaps the 1800s, the skies were entirely free of clutter, telescopes existed, people's eyesight was often better, and as Aubeck and Vallee said, this period was

'entirely free of those modern complications represented by airplanes, dirigibles, rockets and the often-mentioned opportunities for misinterpretation represented by military prototypes. There may have been a few balloons in the sky ..... but the first dirigible able to return to its starting point was not demonstrated until the celebrated flight of French Captains Renard and Krebs on August 9, 1884, and the first airplane (equipped with a steam engine) would not fly until Clement Ader's feat at Satory on October 14, 1897’.

These were bloody, and unsettling times on earth, not just in the skies.  Numerous kings and religious leaders were assassinated, the Crusades were in full swing, and the Black Death swept Europe.  One could be fanciful and imagine this to be an early form of germ warfare, leashed on us by those who wished to take over.  There were certainly both aggressors and defenders in the sky.

The Black Death, also known as the Great Plague or the Plague, ......was one of the most devastating pandemics in human history, resulting in the deaths of an estimated 75 to 200 million people in Eurasia and peaking in Europe from 1347 to 1351.T..... The plague created a number of religious, social and economic upheavals which had profound effects on the course of European history........The Black Death is estimated to have killed 30% to 60% of Europe's population. In total, the plague may have reduced the world population from an estimated 450 million to 350–375 million in the 14th century. 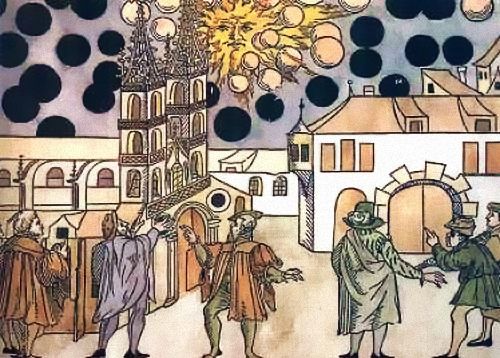 Right:  A 16th century woodcutting depicts a scene in which dark spheres were witnessed hovering over the town of Basel, Switzerland in 1566

There was, furthermore, other major religious reform with Martin Luther in Europe  (10 November 1483 – 18 February 1546) - a German professor of theology, who was a seminal figure in the Protestant Reformation.  This was followed by John Wesley (28 June 1703 – 2 March 1791) an English cleric, theologian and evangelist who was a leader of a revival movement within the Church of England known as Methodism.

True science based on observation and meticulous recording also started to be used and the composition of beautiful music was a major activity of many.  Art also flourished and blossomed after this period. For example:

Michelangelo di Lodovico Buonarroti Simoni or more commonly known by his first name Michelangelo (6 March 1475 – 18 February 1564) was an Italian sculptor, painter, architect and poet of the High Renaissance born in the Republic of Florence, who exerted an unparalleled influence on the development of Western art.

As such whoever won this war, may have set in motion [may being the operative word] a new era in creativity after a terrifying period of destruction.  Of course there is no reason to suppose this will not rpeat itself

From the Book of the Damned - Charles Fort 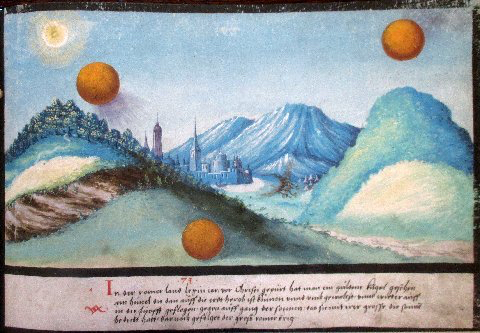 I think that there are, out in inter-planetary space, Super Tamerlanes at the head of hosts of celestial ravagers--which have come here and pounced upon civilizations of the past, cleaning them up all but their bones, or temples and monuments--for which later historians have invented exclusionist histories. But if something now has a legal right to us, and can enforce its proprietorship, they've been warned off. It's the way of all exploitation. I should say that we're now under cultivation: that we're conscious of it, but have the impertinence to attribute it all to our own nobler and higher instincts……………..

But the acceptance is forced upon me that there are modes and modes and modes of inter-planetary existence: … a super-geography--or celestiography--of vast stagnant regions, but also of Super-Niagaras and Ultra-Mississippis: and a super-sociology--voyagers and tourists and ravagers: the hunted and the hunting: the super-mercantile, the super-piratic, the super-evangelical………….

The universal attempt to formulate or to regularize--an attempt that can be made only by disregarding or denying. Or all things disregard or deny that which will eventually invade and destroy them--