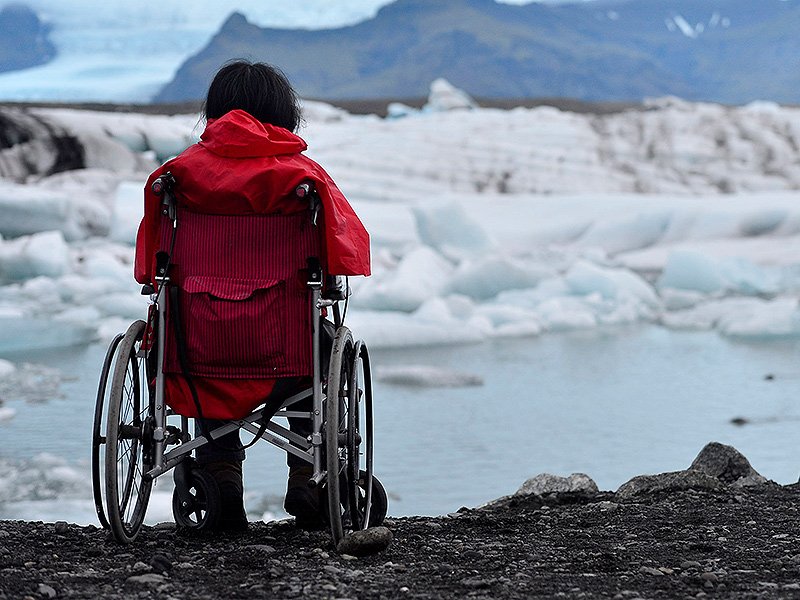 Paraplegia is an impairment in motor or sensory function of the lower extremities.

The word comes from Ionic Greek παραπληγίη "half-striking". It is thus a form of paralysis and the causes are discussed in more detail under the general heading we have for paralysis, but we have provided some more general pointers here.

Tetraplegia, also known as quadriplegia, in contrast, is paralysis caused by illness or injury that results in the partial or total loss of use of all four limbs and torso; paraplegia is similar but does not affect the arms.  If only one limb is affected, the correct term is monoplegia.  Spastic paraplegia is a form of paraplegia defined by spasticity of the affected muscles, rather than flaccid paralysis.  Again, the causes are discussed in more detail under the general heading we have for paralysis. 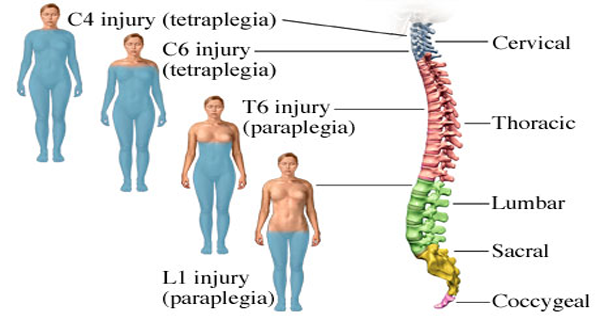 The cause may be physical or emotional. 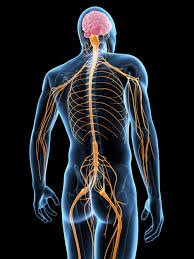 Paraplegia can be caused by spinal cord injury affecting a nerve, or a condition that affects the brain's connection to the nervous system.

Any number of pathogens, toxins, poisons and external aggressors can damage the nerves.  The main root causes are thus as follows, all these are explored in the section on paralysis itself:

The area of the spinal canal that is affected in paraplegia
is either the thoracic, lumbar, or sacral regions.

Paralysis can be caused by brain damage [as mentioned above] and it is known that high emotion is capable of producing a discharge that damages the brain directly.

But high emotion is also able to damage the blood brain barrier allowing pathogens, toxins and poisons to enter the brain thus causing subsequent brain damage with numerous symptoms, of which one may be paraplegia.

We conclude that combat training inducing significant levels of stress, depression and anxiety is accompanied by evidence of increased blood-brain barrier permeability and by increases in systemic pro-inflammatory mediators.  PMID:  24625912

There is also evidence in sensitive individuals of very direct usually temporary effects.

The Influence Of The Mind Upon The Body In Health And Disease, Designed To Elucidate The Action Of The Imagination - Daniel Hack Tuke, M.D., M.R.C.P

Dr. Brierre de Boismont adds to a case illustrative of mental action upon …. the motor system:

" A little peasant girl, Lucia Marini, eight years old, was separated for some time from her mother, a patient in the hospital. She had often begged to be taken to see her mother, but her relations, thinking it only ' caprice’ always refused. The child often repaired to the church to pour out her grief, and was one day found at the foot of the altar, sobbing and almost deprived of consciousness. Shortly after appeared symptoms of an affection of the cerebro-spinal axis, delirium, headache, and inability to stand.

Leeches were applied to the head, and a seton inserted in the neck. This treatment relieved these symptoms, except the paraplegia, and on account of this she was removed to the hospital. Scarcely was she in her bed, than she begged again with tears to see and embrace her mother.

The doctor (kinder, as is so often the case, than the friends of the patient) immediately ordered her request to be granted. Carried in the arms of the nurse to her mother's bed, she threw herself upon her neck, covered her with tears, earnestly inquired after her health, and seemed as if she could not caress her enough. After awhile she was requested to leave her mother and return to her bed. On their attempting to carry her, she sprang to her feet and cried out with delight that she had recovered the use of them. She regained her bed without effort or fatigue. During the time, about ten days, that she remained in the hospital, no unfavorable symptoms returned, and she occupied herself in assiduously waiting upon her mother"