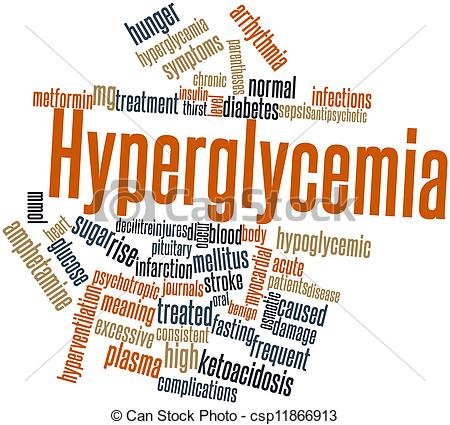 Hyperglycemia or Hyperglycæmia, or high blood sugar, is a condition in which an excessive amount of glucose circulates in the blood plasma.

The definition of ‘high’ is not that precise.  Glucose levels vary before and after meals, and at various times of day, so the definition of "excessive" varies.  As one should be able to see, if one is running to catch the last train home, your blood sugar levels are going to be extremely high in order to fuel your muscle cells to help you get there in time.  But if you are lying semi-comatose on a sofa watching a soap opera, then you need neither energy to power your body, not energy to work your brain, as such the blood sugar levels should be low.

The term ’high’ is thus meaningless, the correct term should be ‘appropriate to the activity being undertaken at the time'.  This point is important, as when the measurement is taken and how it is taken are key to diagnosis.

In general, the 'normal' range for most people (fasting adults) is about 80 to 110 mg/dl or 4 to 6 mmol/l.  A person with a consistent range above 126 mg/dl or 7 mmol/l is generally held to have hyperglycaemia. 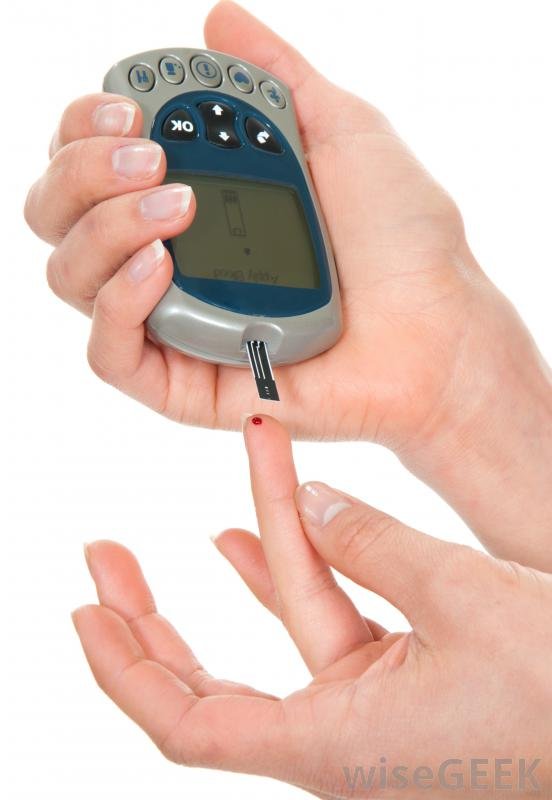 Diabetes mellitis is generally a result of:

In each case, there is 'cell starvation' and elevated blood glucose levels.  Thus there are two main types of diabetes mellitus:

Glucose that is not capable of being used, or not used is in effect a toxin.  It is an irritant particle just like any other irritant particle, and because it is in the blood, it can damage any organ that the blood supplies – the kidney, the lungs, the liver itself, the blood vessels themselves.  Chronic hyperglycemia at levels more than slightly above normal can even produce neurological damage – brain damage – and cardiovascular damage – heart disease.  It can also cause damage to the retina of the eye and cause fuzzy vision or even blindness. 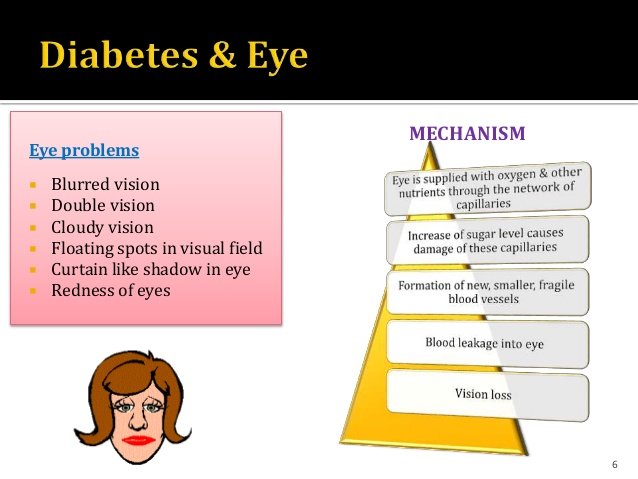 Acute hyperglycemia involving glucose levels that are extremely high is a medical emergency and can rapidly produce serious complications such as fluid loss through osmotic diuresis. It is most often seen in persons who have uncontrolled insulin-dependent diabetes.  It is then that people most often get the spiritual experiences ranging from hallucinations to full out of body and near death experiences.


The following symptoms may be associated with acute or chronic hyperglycemia, with the first three composing the classic hyperglycemic triad: 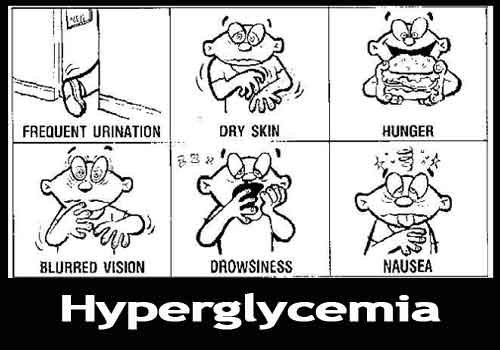 The most obvious and the most easy to correct cause is simply too much sugar in the diet, too high an input of sugary drinks, sugary high energy foods, and too many carbohydrates in the diet – too much input for the output.

There are the obvious sources of sugar in food, but many ‘healthy’ foods – fruit for example – contain sugars and if we overdose on smoothies, we are overdosing on sugar.   In other words the person is eating too much for what they need.  Too much energy input and too little output.  Overdosing on food.

But this would be to simplify things far too much, far too much.  In fact, one of the other principal causes is stress. 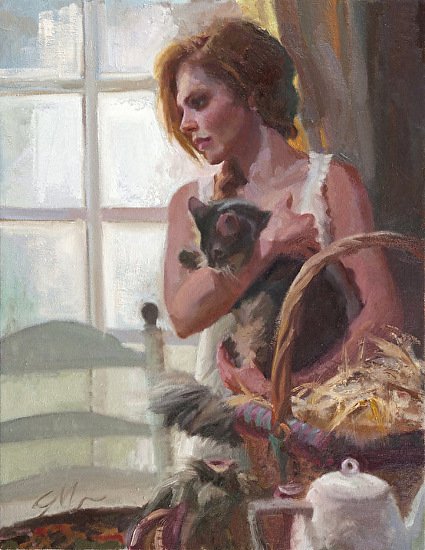 Temporary hyperglycaemia can be caused by stress of various sorts.  Thus if you are frightened of doctors and hospitals, or even frightened from anticipating the results of tests, you may have temporary high sugar levels that result in a false diagnosis.  Stress provokes the sympathetic nervous system to come into play – the flight or fight response.

During this reaction, the body releases glucose into the blood stream in order that it can go to muscles  in order that the ‘fighting and flighting’ can be put into play.  Thus, in a doctor’s surgery, with no chance of escape, the blood test may be taken and your heart may be pumping away from terror, wondering what will be found – and the sugar levels will be way over the top.

Any event which produces stress - induces the sympathetic nervous system will also have the same result -  physical trauma such as injury, or the results of surgery and many forms of severe stress can temporarily increase glucose levels.

Ideally, any form of measurement of sugar levels needs to be taken when we are in a stress free environment.  Perhaps it could be taken on waking up from a good night’s rest, with no nightmares, and before you have that cup of tea or coffee.  Then it might give the correct and accurate reading.

Permanent hyperglycaemia - If you are permanently stressed and worried, however, a ‘worrier’, who does not relax and takes the burden of the world upon their shoulders, then it may well be that the glucose released from your liver, is swilling around your system on a permanent basis.  A permanently stressed person is in permanent flight or fight.  They will have high blood sugar levels, a dry mouth, flushed complexion, and may well be constipated, with dilated pupils, unsteady heartbeat, and their veins and arteries dilated to take oxygen to their limbs for the quick getaway [that never comes] - all the symptoms of the sympathetic nervous system in full fling. 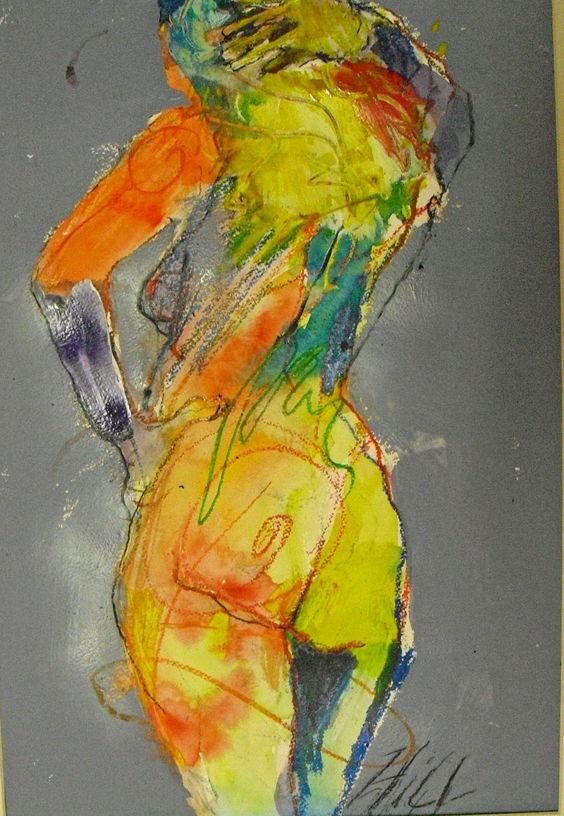 The body knows it doesn’t need all this glucose, so in this permanently stressed state, it reduces the number of ‘receptors’ in the cells so that the cells are not overloaded with glucose they don’t need.

The glucose in your blood stream becomes an irritant and causes plaque to form, and your cells become permanently resistant to glucose, that is, even when you need it to do things, they have been adapted to keep away glucose, that in fact you may need at that moment.

This is why the long term outcome of too much blood sugar is fatigue, terrible overwhelming tiredness.

The only way to treat this problem is by a combination of relaxation that induces the parasympathetic nervous system and by cutting out sugar almost completely, so that the body very gradually repairs the cells to accept glucose again.  In a sense you have become a ‘sugar junkie’ and as such the only solution is to do what drug addicts do and cut out the sugar.

The symptoms of cutting out sugar are not at all dissimilar to those a junkie feels – cravings for sugar, sweating, asthmatic like attacks, irregular heart beats, shaking, even tremours.

Medicine at the moment is symptom based, in other words, the doctor treats the symptoms - such as this one, high blood sugar - without necessarily addressing the cause.   But by treating symptoms, the cause will still be there, and many pharmaceuticals disrupt the body's systems.

Our body is a wonderful integrated system, whereby one organ is intricately connected to all others, as such by tweaking one, it will affect all the others.  And it appears that in a cause effect chain that is not always easy to unravel, pharmaceuticals are causing hyperglycaemia.  Furthermore, if we use the eHealthme site, which collects the Adverse Drug Reports submitted to the FDA and SEDA by doctors in the USA, there are a growing number of people suffering from pharmaceutical induced hyperglycaemia:

In order to see an up-to-date list of the pharmaceuticals implicated in causing hyperglycaemia, follow this LINK to the eHealthme site.  We have had problems with broken links with this site, so if the link does not work, use the 'all conditions' table to find hyperglycaemia.  Then scroll down until you find the section 'Drugs that could cause'.

As of December 2016, about 1,850 pharmaceuticals were implicated in the development of hyperglycemia. 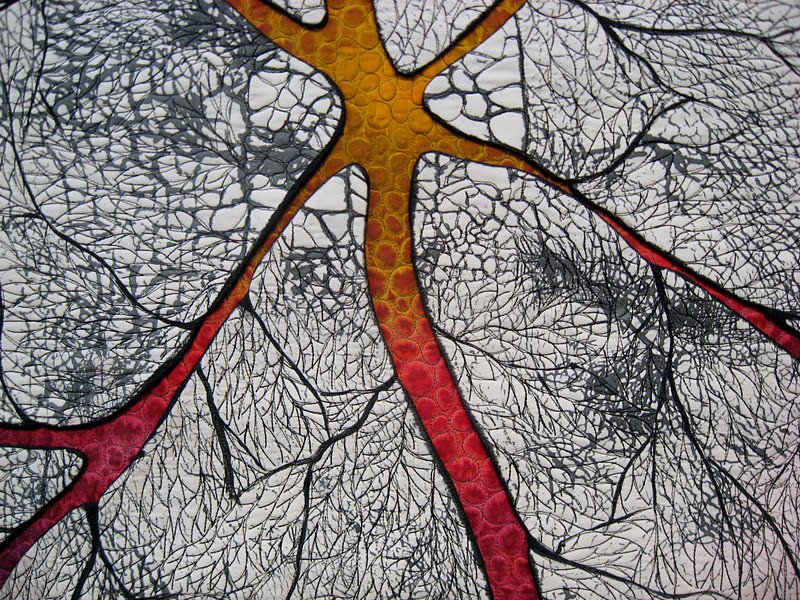 
The acute administration of stimulants such as amphetamine typically produces hyperglycemia; chronic use, however, produces hypoglycemia.

Plasma glucose >120 mg/dl in the absence of diabetes can be a clinical sign of sepsis.  In effect as a symptom it may indicate that sepsis is present.

Sepsis is  a set of symptoms that indicate that the body is suffering from attack by a very dangerous pathogen. There may be fever, coma, increased breathing rate, even delirium, but these are simply outward signs of a very serious battle internally.  The immune system of the body is having to fight for your life and as a consequence as part of the overall battle, there may be casualties - 'friendly fire', damage to the body's own tissues and organs.  If a virus has secreted itself in a cell, for example, the body may decide to kill that cell in order to kill the virus.

All the familiar causes appear in the list for the ultimate cause of sepsis  - viruses, bacteria, vaccines, fungi, parasites, radiation, heavy  metals [including dental fillings], toxins and pharmaceuticals.

Needless to say this fight not only invokes the sympathetic nervous system, it demands a great deal of energy from reserves, the troops have to be fuelled by something, as such one should expect blood sugar levels to be high.

Interestingly, therefore, high blood glucose levels may thus be an outward sign of an internal infection, and to treat the glucose levels one must hunt out the pathogen.

Find the cause, address the cause

Why do people get hallucinations, visions, out of body experiences and even near death experiences from hyperglycemia? 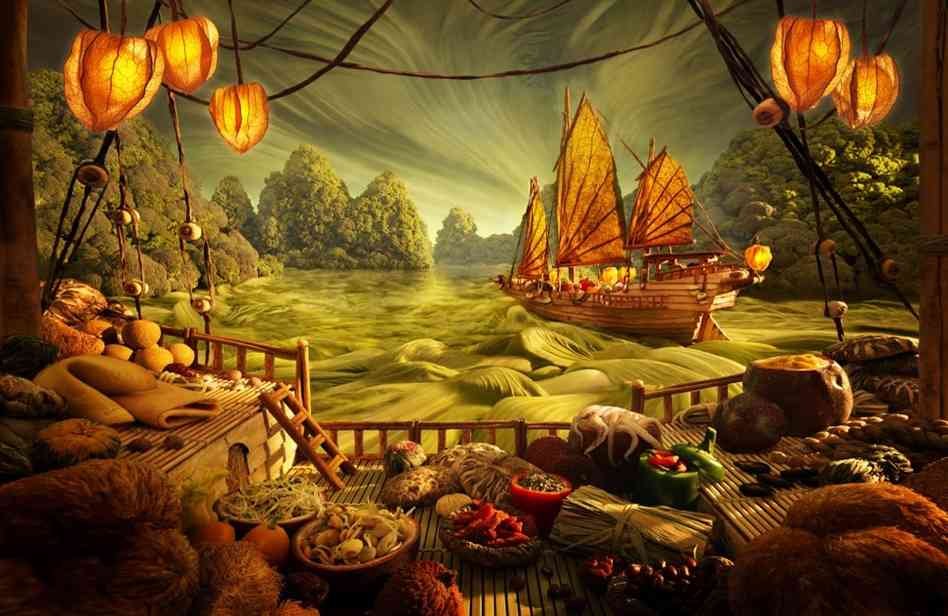 When a person has hyperglycemia, the kidneys are desperately trying to remove the excess blood sugar from the blood – as a result there is osmotic diuresis.

Osmotic diuresis is increased urination caused by the presence of certain substances in the small tubes of the kidneys.   The excretion occurs when the glucose enters the kidney tubules and cannot be reabsorbed. The kidney then uses water to flush away the excess glucose, increasing urine output (ie. diuresis).  Sodium, chloride, and potassium are often excreted too in Osmotic diuresis, leading to an inbalance in essential minerals.

But unless enough water is taken in, osmotic diuresis results in dehydration from polyuria and the classic symptom of polydipsia (excessive thirst) results.

Thus the hallucinations and spiritual experiences are principally caused by dehydration, with a long term effect from mineral imbalance.  Physically the mechanisms in operation are described in the section I have provided in  the Chemistry of dehydration.

Functionally, however, depriving yourself of fluids is understandably regarded by the body as a threat.  The messages being received from all the sensory systems is HELP HELP HELP – you are killing us, we are dying!!!!  DO SOMETHING!!  An excess of glucose is also acting as a poison, as such we are also being poisoned - more threat.

The Will realising this threat is severe, then mobilises its functional forces into the organs and functions which are key to survival.   There is a gradual shut down of function that will be evident in reduced reasoning power and memory.  A body deprived of fluids and being poisoned is, in effect, gradually shutting down. And in cases where the body is shutting down, it reverts to core autonomic system functions – the functions it needs to maintain itself.   This is why some people go into a coma.

Any function which is closed down for any length of time may never be capable of being revived again.  Thus people who have faced severe hyperglycemia lasting some time may have permanently damaged memories and reasoning power.

The Will gets all these messages from the body but is unable to do anything.

At which point it gives up and the composer takes over.  And we have a spiritual experience, which in severe cases can be near death experiences.