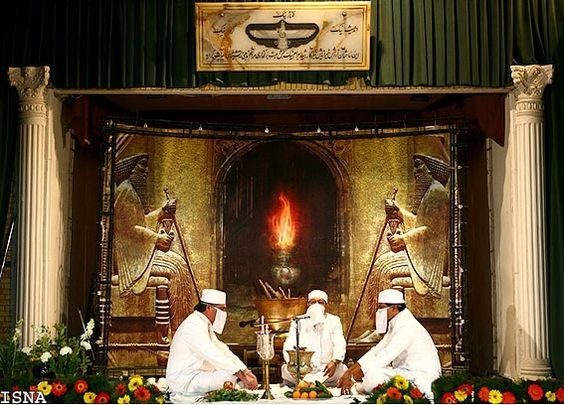 Fire temples in Zoroastrianism are the place of worship for Zoroastrians, often called dar-e mehr (Persian) or agiyari (Gujarati).  As we saw in part 01, fires were originally lit on mounds, but it seems that walking up hills to worship, especially as the ceremonies became more complex, no longer seemed sensible, so worship was transferred to a temple, where the temple replaces the mound symbolically and the flame can be kept permanently on the go because it is inside.  In other words the fire, because it never dies is constantly venerating divinity, and the temple is always open for prayer and worship.  Open all hours.

There is no allusion to a temple cult of fire in the Avesta proper, nor is there any Old Persian language word for one. Moreover, "no actual ruins of a fire temple have been identified from before the Parthian period" (Boyce, 1975:454).  So we know it is a later modification of practise.

It has the added advantage that the ash can be more easily collected, as it does not blow away.  Although modern day Zoroastrians collect the ash, it is clear that the symbolism has largely been lost in many of the communities ripped from their centres of worship.  Clean, “white ash for the purification ceremonies [is] regarded as the basis of ritual life".  In the first place, symbolically it needs to be grey and it should not, if we are being symbolically accurate, be used for purification [this is what water is symbolically for] , it is more a badge of achievement.  This person has been ‘purged by fire’.  Has been through rebirth.

The oldest remains of what has been identified as a fire temple are those on Mount Khajeh, near Lake Hamun in Sistan. Only traces of the foundation and ground-plan survive and have been tentatively dated to the 3rd or 4th century BCE. The temple was rebuilt during the Parthian era (250 BCE-226 CE), and enlarged during Sassanid times (226–650 CE).

The characteristic feature of the Sassanid fire temple was its domed sanctuary where the fire-altar stood. (Boyce, 1987:9-10) This sanctuary always had a square ground plan with a pillar in each corner that then supported the dome (the gombad). Archaeological remains and literary evidence from Zend commentaries on the Avesta suggest that the sanctuary was surrounded by a passageway on all four sides. "On a number of sites the gombad, made usually of rubble masonry with courses of stone, is all that survives, and so such ruins are popularly called in Fars čahār-tāq or 'four arches'." (Boyce, 1987:10).

In other words, the temple attempted to preserve the original symbolism with its dome representing the dome of the sky [and Egg] and the square plan being symbolically the Earth.  Like a sort of mandala.  Interestingly the four pillars may have been a reference to the four pillars of wisdom.

Ruins of temples of the Sassanid era have been found in various parts of the former empire, mostly in the southwest (Fars, Kerman and Elam), but the biggest and most impressive are those of Adur Gushnasp in Media Minor.

Wikipedia
The remains of a fire-altar, most likely constructed during the proselytizing campaign of Yazdegerd II (r. 438-457) against the Christian Armenians, have been found directly beneath the main altar of the Echmiadzin Cathedral, the Mother See of the Armenian Apostolic Church (Russell, 1993). The remains of a probable fire temple, later converted to a church, have been found within the ruins of the abandoned medieval Armenian city of Ani . 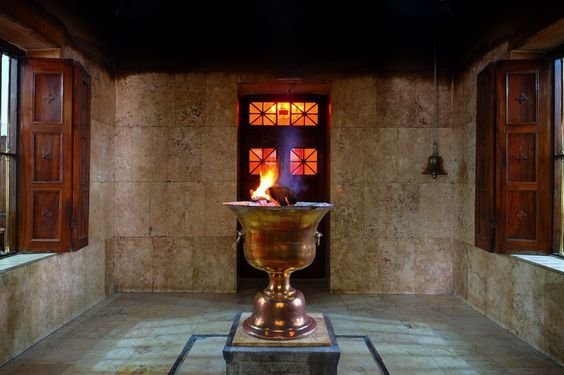 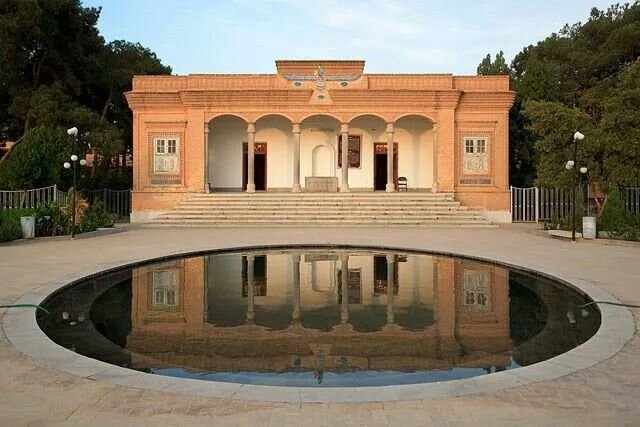