The pictures tend to lend credence to the suggestion that all the ‘gods’ found in carvings and decorations in temples were real people – shamans with unusual powers.  ‘God’ L for example is human, is covered with a jaguar skin – the animal he perceives himself to be and wants to become in trance, he has the feather and eagle or condor decoration for ‘flight’ – ecstatic flight  - and he also appears to be smoking something…….. 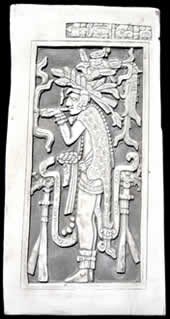 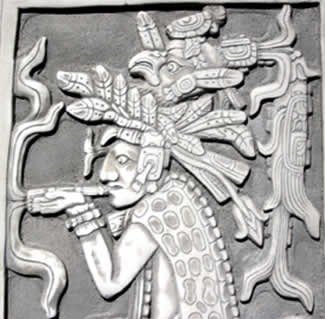 Xbalanque (or Yax-Balam), together with his brother Hunahpu, was responsible for defeating the lords of the underworld through trickery and athletic prowess in order to restore to life his father the Maize God.

Among the trials of the twins in the underworld was a series of ballgames. Once, Hunahpu's head was cut off by a bat. Xbalanque fashioned a replacement out of a pumpkin, but when the brothers went to the game, they found that the underworld lords had replaced the traditional rubber ball with the real head of Hunahpu. Xbalanque, thinking quickly, struck a rabbit that rolled up into a ball. Mistaking this for the head, the underworld lords ran after it, which gave Xbalanque time to restore his brother's head to its rightful place upon his body.

After their defeat of the Death God, the twins rose to the sky, where Xbalanque governed the realm of the moon (or the inverted sun of nighttime and the underworld) and his brother the sun.