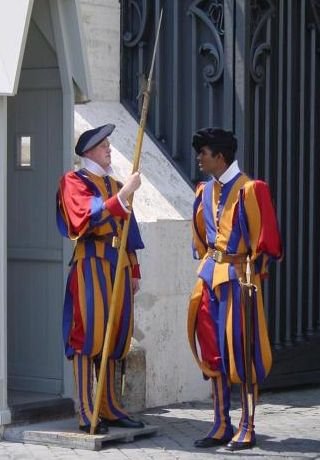 The Vatican City has no armed forces of its own, but the Swiss Guard is a military corps of the Holy See responsible for the personal security of the Pope, and resident in the state.

Soldiers of the Swiss Guard are entitled to hold Vatican City State passports and nationality. Swiss mercenaries were historically recruited by Popes as part of an army for the Papal States, and the Pontifical Swiss Guard was founded by Pope Julius II on 22 January 1506 as the pope's personal bodyguard and continues to fulfill that function. It is listed in the Annuario Pontificio under "Holy See", not under "State of Vatican City".

At the end of 2005, the Guard had 134 members. Recruitment is arranged by a special agreement between the Holy See and Switzerland. All recruits must be Catholic, unmarried males with Swiss citizenship who have completed their basic training with the Swiss Army with certificates of good conduct, be between the ages of 19 and 30, and be at least 174 cm (5 ft 9 in) in height.

They wear the uniform of a harlequin - an extremely gifted shaman capable of performing both the black and white shamanic roles. The colours of the harlequins costume may not always be black and white but are always contrasting.  Incorporated into the costume may also be a hat [hill], a collar [ruff], the cone, a mask, a sword, and a cross.  Even the baggy trousers to make them look like they have big thighs has a meaning .............