Vasiliev, Professor L L - Experiments in mental suggestion – Experiments with with ‘fresh’ [unsophisticated] subjects who do not as yet know anything about the experiments 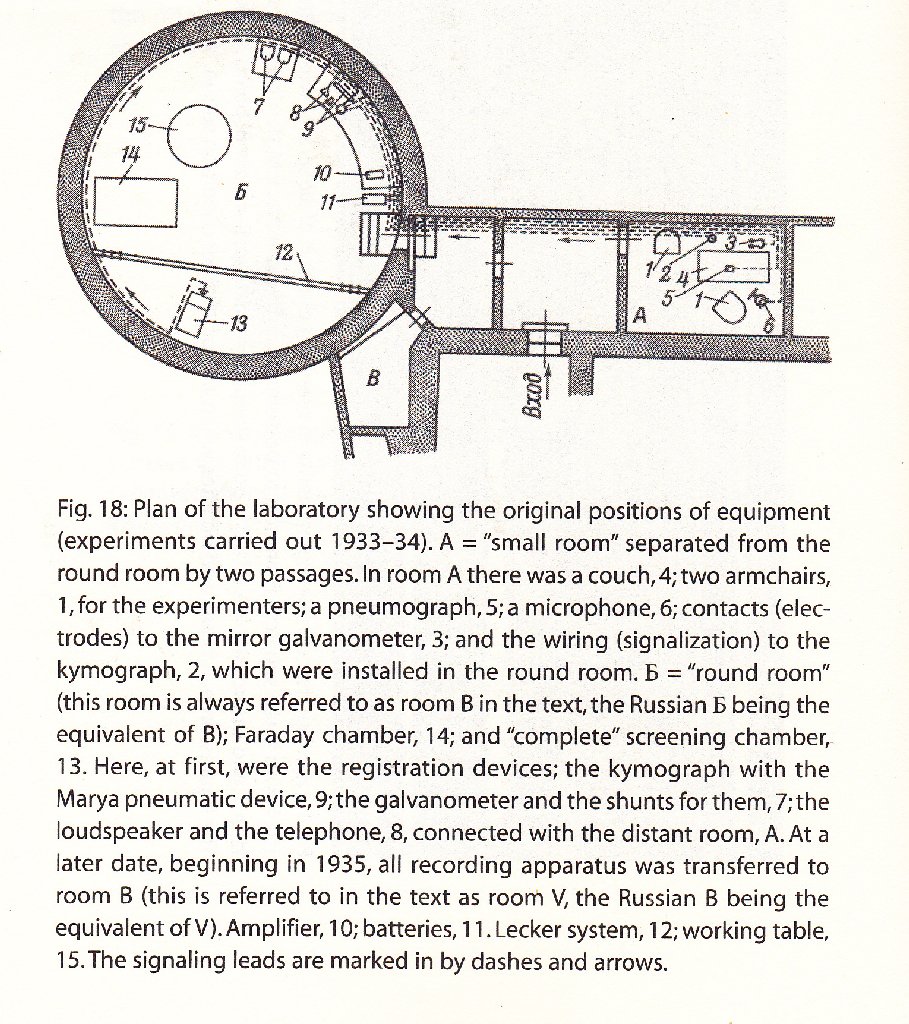 We had to find new subjects who would be suitable for experimentation by means of the hypnogenic method, and such subjects were found. Amongst their number were intellectual and professional people (a teacher, an interpreter and others) and manual labourers; some subjects were normal and healthy, while others were neurotic.

In the second period of our work (1935 to ‘36) we used these subjects, employing the same methods under the same and also under different conditions to be described below.

The first experiments in mental suggestion carried out with "fresh" ["unsophisticated"] subjects who do not as yet know anything about the experiments nor what to expect are particularly valuable. Here are some such first experiments with 4 new subjects.

Experiment 1. Subject Z. came to the laboratory for the first time in order to participate in an experiment. It was decided there and then immediately to proceed with mental suggestion of sleep to Z. without re-entering the room and without warning her that the experiment was about to begin. Observing the subject through a small window in the wall the experimenters noted that she went to sleep within 1 min. 20 sec. from the beginning of suggestion and from within 3 mins of leaving her in the room.

Experiment 2. Subject I. arrived at the laboratory accompanied by Dr. Dubrovsky; she entered room A and conversed with him for 20 minutes. The subject did not know of the presence in the laboratory of a second experimenter (the sender). Within 20 minutes from the time of their arrival the sender (Tomashevsky) from room B started on mental suggestion to go to sleep. After 2 mins from the beginning of suggestion I.’s speech stopped, and sleep set in.

Experiment3. Subject B. came to the laboratory for the first time to take part in the experiments. At 6:10 she was asked to sit in the arm-chair quietly and to press the air pressure rubber balloon in room B. The compressions of the balloon were registered on the kymographic record in another room, V in which the sender was (see Fig. 22, for explanation of the letters "B" and "V' see legends to Figs. 18 and 22). At 6:21 the sender began to suggest sleep. After 30 seconds sleep set in. At 6 h. 23 min.30 sec. the sender began suggesting mental awakening, and at the same instant the registrations began to manifest a state of vigilance.

Experiment 4. Subject K. came to the laboratory for the first time. He was requested to compress the rubber balloon and to stop pressing should he go to sleep. K. was left in room B, the sender in room A (Fig. 22). The subject started compressing the balloon at 8:20 . At 8:22 mental suggestion to go to sleep was started, and in 4 minutes the subject fell asleep. After 3 minutes the sender made an attempt at mentally suggesting to the subject that he should wake up (for response to this suggestion see Fig. 19).At 8:32 the sender began to suggest awakening for a second time, and within 1 minute the first swings appeared on the record and within 2 112 minutes the subject woke up.

It must be borne in mind that these experiments with our new subjects were carried out when the various pieces of apparatus had been assigned new places (as compared with Fig. 18). The recording appliances were transferred from the round room B into the side room V (see Fig.22). The round room was now only used by the percipients. The sender was in the most distant room A. In that room a new "perfect" screening chamber was installed (No. 3), made of sheet lead 3 mm in thickness. The sender stepped into the chamber through an opening made in its "roof," a step ladder being used to get to it (Fig.23). The distance between chambers 1 and 3 was 12 metres. Room A and the round room B were separated by two intervening rooms with three closed doors. 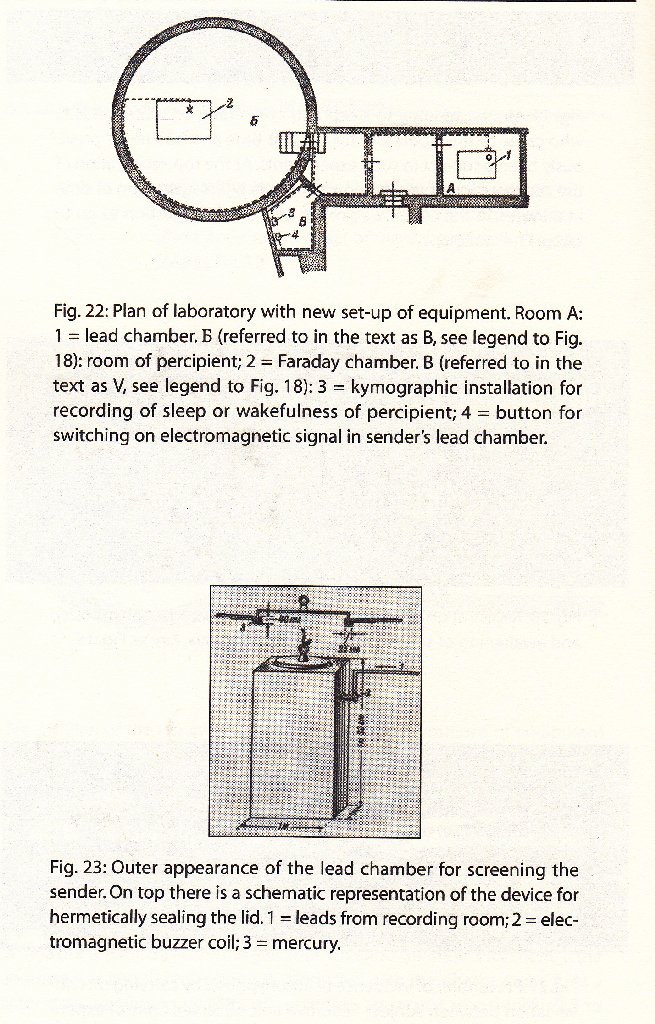