Both the Raven and Crow are extremely important figures in the cultures of the Pacific North west.  In Tlingit and Haida cultures, Raven was both a Trickster and Creator god.

Raven creates the world - summary
A raven story from the Puget Sound region describes the "Raven" as having originally lived in the land of spirits (literally bird land) that existed before the world of humans. One day the Raven became so bored with bird land that he flew away, carrying a stone in his beak. When the Raven became tired of carrying the stone and dropped it, the stone fell into the ocean and expanded until it formed the firmament on which humans now live.
In the creator role, and in the Raven's role as the totem and ancestor of one of the four northwest clan houses, the Raven is often addressed as Grandfather Raven. It is not clear whether this form of address is intended to refer to a creator Raven who is different from the trickster Raven, or if it is just a vain attempt to encourage the trickster spirit to act respectably.

Bill Reid created the sculpture of The Raven and The First Men depicting a scene from a Haida myth that unifies the Raven as both the trickster and the creator. According to this myth, the raven who was both bored and well fed, found and freed some creatures trapped in a clam. These scared and timid beings were the first men of the world, and they were coaxed out of the clam shell by the raven. Soon the raven was bored with these creatures and planned to return them to their shell. Instead, the raven decided to search for the female counterparts of these male beings. The raven found some female humans trapped in a chiton, freed them, and was entertained as the two sexes met and began to interact. The raven, always known as a trickster, was responsible for the pairing of humans and felt very protective of them. With the Raven perceived as the creator, many Haida myths and legends often suggest the raven as a provider to mankind. 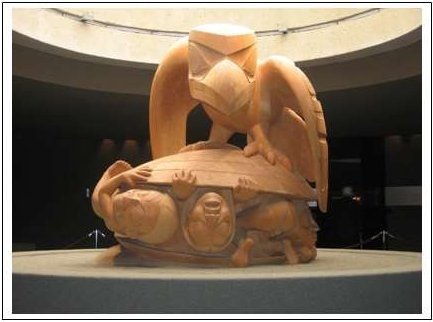 Bill Reid's sculpture The Raven and The First Men, showing part of a Haida creation myth. Museum of Anthropology, University of British Columbia.