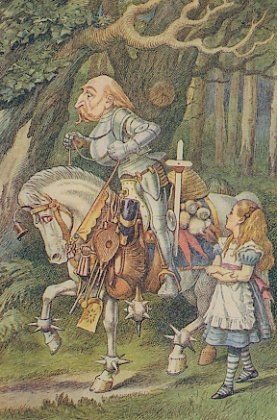 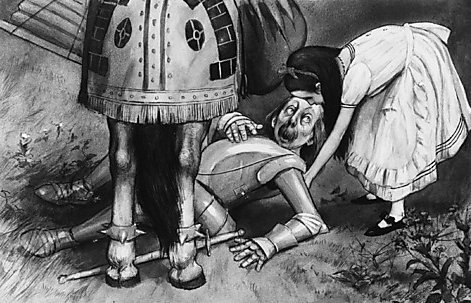 I bet they were rolling about in the aisles over this one in the local Freemasons.  I am not going to explain - sorry.

The helmet of invisibility is not the same.

There was a short silence after this, and then the Knight went on again. 'I'm a great hand at inventing things. Now, I daresay you noticed, that last time you picked me up, that I was looking rather thoughtful?'

'You WERE a little grave,' said Alice.

'Well, just then I was inventing a new way of getting over a gate—would you like to hear it?'

'I'll tell you how I came to think of it,' said the Knight. 'You see, I said to myself, "The only difficulty is with the feet: the HEAD is high enough already." Now, first I put my head on the top of the gate--then I stand on my head--then the feet are high enough, you see--then I'm over, you see.'

'Yes, I suppose you'd be over when that was done,' Alice said thoughtfully: 'but don't you think it would be rather hard?'

'I haven't tried it yet,' the Knight said, gravely: 'so I can't tell for certain--but I'm afraid it WOULD be a little hard.'

He looked so vexed at the idea, that Alice changed the subject hastily. 'What a curious helmet you've got!' she said cheerfully. 'Is that your invention too?'

The Knight looked down proudly at his helmet, which hung from the saddle. 'Yes,' he said, 'but I've invented a better one than that—like a sugar loaf. When I used to wear it, if I fell off the horse, it always touched the ground directly. So I had a VERY little way to fall, you see--But there WAS the danger of falling INTO it, to be sure. That happened to me once--and the worst of it was, before I could get out again, the other White Knight came and put it on. He thought it was his own helmet.'

The knight looked so solemn about it that Alice did not dare to laugh. 'I'm afraid you must have hurt him,' she said in a trembling voice, 'being on the top of his head.'

'I had to kick him, of course,' the Knight said, very seriously. 'And then he took the helmet off again--but it took hours and hours to get me out. I was as fast as--as lightning, you know.'

'But that's a different kind of fastness,' Alice objected.

The Knight shook his head. 'It was all kinds of fastness with me, I can assure you!' he said. He raised his hands in some excitement as he said this, and instantly rolled out of the saddle, and fell headlong into a deep ditch.

Alice ran to the side of the ditch to look for him. She was rather startled by the fall, as for some time he had kept on very well, and she was afraid that he really WAS hurt this time. However, though she could see nothing but the soles of his feet, she was much relieved to hear that he was talking on in his usual tone. 'All kinds of fastness,' he repeated: 'but it was careless of him to put another man's helmet on--with the man in it, too.'