Through the Looking Glass - Ch 07 - 2 Hatta and Haigha 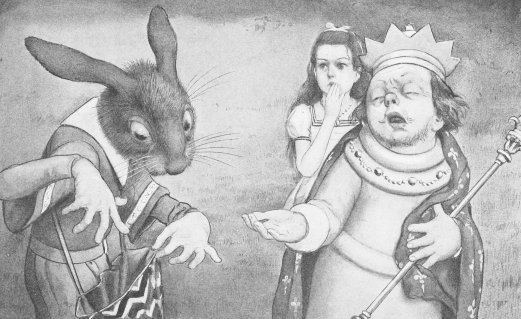 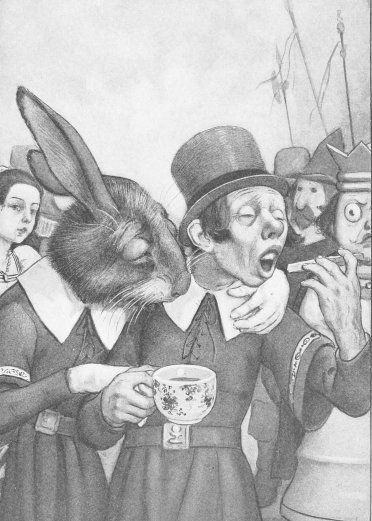 However, now you've got your breath, you may tell us what's happened in the town.'

'I'll whisper it,' said the Messenger, putting his hands to his mouth in the shape of a trumpet, and stooping so as to get close to the King's ear. Alice was sorry for this, as she wanted to hear the news too. However, instead of whispering, he simply shouted at the top of his voice 'They're at it again!'

'Do you call THAT a whisper?' cried the poor King, jumping up and shaking himself. 'If you do such a thing again, I'll have you buttered! It went through and through my head like an earthquake!'

'It would have to be a very tiny earthquake!' thought Alice. 'Who are at it again?' she ventured to ask.

'Why the Lion and the Unicorn, of course,' said the King.

'Fighting for the crown?'

'Yes, to be sure,' said the King: 'and the best of the joke is, that it's MY crown all the while! Let's run and see them.' And they trotted off, Alice repeating to herself, as she ran, the words of the old song:--

'Does--the one--that wins--get the crown?' she asked, as well as she could, for the run was putting her quite out of breath.

'Would you--be good enough,' Alice panted out, after running a little further, 'to stop a minute--just to get--one's breath again?'

'I'm GOOD enough,' the King said, 'only I'm not strong enough. You see, a minute goes by so fearfully quick. You might as well try to stop a Bandersnatch!'

Alice had no more breath for talking, so they trotted on in silence, till they came in sight of a great crowd, in the middle of which the Lion and Unicorn were fighting. They were in such a cloud of dust, that at first Alice could not make out which was which: but she soon managed to distinguish the Unicorn by his horn.

They placed themselves close to where Hatta, the other messenger, was standing watching the fight, with a cup of tea in one hand and a piece of bread-and-butter in the other.

'He's only just out of prison, and he hadn't finished his tea when he was sent in,' Haigha whispered to Alice: 'and they only give them oyster-shells in there--so you see he's very hungry and thirsty. How are you, dear child?' he went on, putting his arm affectionately round Hatta's neck.

Hatta looked round and nodded, and went on with his bread and butter.

'Were you happy in prison, dear child?' said Haigha.

Hatta looked round once more, and this time a tear or two trickled down his cheek: but not a word would he say.

'Speak, can't you!' Haigha cried impatiently. But Hatta only munched away, and drank some more tea.

'Speak, won't you!' cried the King. 'How are they getting on with the fight?'

Hatta made a desperate effort, and swallowed a large piece of bread-and-butter. 'They're getting on very well,' he said in a choking voice: 'each of them has been down about eighty-seven times.'

'Then I suppose they'll soon bring the white bread and the brown?' Alice ventured to remark.