Thomson's most famous paintings are his depictions of pine trees, particularly The Jack Pine and The West Wind. David Silcox has described these paintings as "the visual equivalent of a national anthem, for they have come to represent the spirit of the whole country, notwithstanding the fact that vast tracts of Canada have no pine trees", and as "so majestic and memorable that nearly everyone knows them". Arthur Lismer described them similarly, saying that the tree in The West Wind was a symbol of the Canadian character, unyielding to the wind and emblematic of steadfastness and resolution.

Thomson had a great enthusiasm for trees and worked to capture their forms, their surrounding locations, and the effect of the seasons on them. He normally depicted trees as amalgamated masses, giving "form structure and colour by dragging paint in bold strokes over an underlying tone". His favourite motif was of a slight hill next to a body of water. His enthusiasm is especially apparent in an anecdote from Ernest Freure, who invited Thomson to camp on an island on Georgian Bay:

One day while we were together on my island, I was talking to Tom about my plans for cleaning up the dead wood and trees and I said I was going to cut down all the trees but he said, "No, don't do that, they are beautiful."

The theme of the single tree is common in Art Nouveau, while the motif of the lone, heroic tree goes back even further to at least Caspar David Friedrich and early German Romanticism. …………. 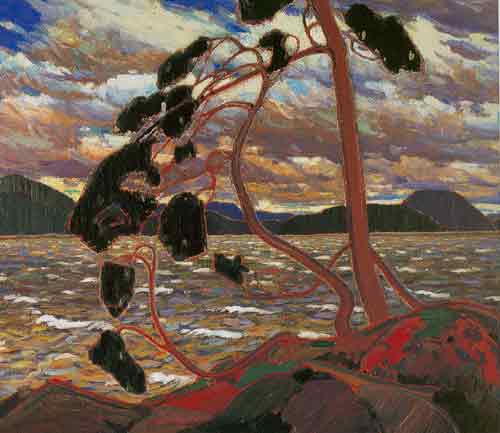