The Ceasing of Notions – 03 How does one become a buddha? 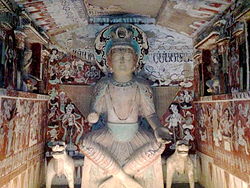 9. Emmon asks 'What does a buddha eradicate and what does he attain in order to be called a buddha?'

Master Nyuri answers 'Without having eradicated anything, without attaining anything, he already is Buddha.'

10.  Emmon:  'If he neither eradicates anything nor attains anything, how then does he differ from an ordinary human being?'

11.  Emmon:  'Now you are saying that ordinary beings have something to attain but that buddhas do not.  What then is the difference between attaining and not-attaining?'

Master Nyuri:  'Delusion arises because ordinary beings want to attain something.  Buddhas are free from delusions because they do not wish to attain anything.  Within delusion arises at once division into same and not same.  Without delusion there is nether difference nor non difference.'

Master Nyuri : ' "Ordinary men" and "buddha" are both just names.  As names they are the same, without difference.  It is as if one were speaking about the hair of a tortoise or about the horns of a hare'

13.  Emmon:  'If the Buddha is like the hairs of a tortoise or the horns of a hare, then it can be said that he does not exist at all.  What are you trying to teach?'

14.  Emmon:  'What do you mean by saying there is no such thing as the hairs, and what then does the tortoise mean?'

Master Nyuri:  'The tortoise is analogous to the Way, and the hairs point at the self.  Buddha is without self and thus is the Way.  Ordinary men are obsessed with names and the preconception of self - this is how they are different from the Buddha - and so are convinced that the tortoise has hairs and that the hare has horns.'

Master Nyuri:  'There is neither an existence of the Way nor is there a nonexistence of a self.  Why?  The tortoise is not something that did not exist in the past but exists now in the present, and so it cannot be referred to as existing.  The hairs are not something that did exist in the past but do not exist in the present, and so one cannot refer to them as non-existing.  The same analogy holds good for the Way and the self.'