Quakers - George Fox and The Witches of Pendle Hill

I Ain’t Afraid of No Ghosts – Malcolm J
from http://heritage-key.com/category/tags/pendle-hill

Pendle Hill in the northeast of Lancashire, England, boasts a wealth of important historical connections.   In 1612, 12 women accused of witchcraft – all of whom lived in the Pendle Hill area – were tried and executed in what was known as the Pendle witch trials, perhaps the most famous episode of its kind in English history. Later that century, in 1652, dissenting preacher George Fox climbed to the top of the hill, met God and was subsequently driven to found the Quakers. A Bronze Age burial site has also been discovered at the hill’s summit.  Surprisingly no major physical investigation of Pendle Hill has ever been carried out

Pendle Hill is perhaps the most famous name in the history of British witchcraft, holding a place similar to that attached to Salem, Massachusetts, in US folklore. In fact, it was not this 1,830 foot high peak north of Burnley, between Colne and Clitheroe, that was the centre of evil. Rather the wooded slopes around it had been associated with witch-craft long before the infamous trials of the seventeenth century.

Indeed there are stories of strange beasts and names such as 'Devil's Chair' appear in this area. At Hell Hole Bridge near Clitheroe the siege by rocks reportedly tossed by an unseen devil from the Pendle slopes has entered legend.

The eerie nature of this region does not stem from April 1612, but that is when Old Demdike, a notorious witch whose antics in the Pendle Forest were reputed to have gone on for fifty years, was finally accused under strict new laws sweeping the country. Amidst claims of cursed dolls causing sickness and death no fewer than nineteen people were quickly arrested and tried as witches from what was believed to be a much larger coven. In the end ten women were found guilty and most were hanged. 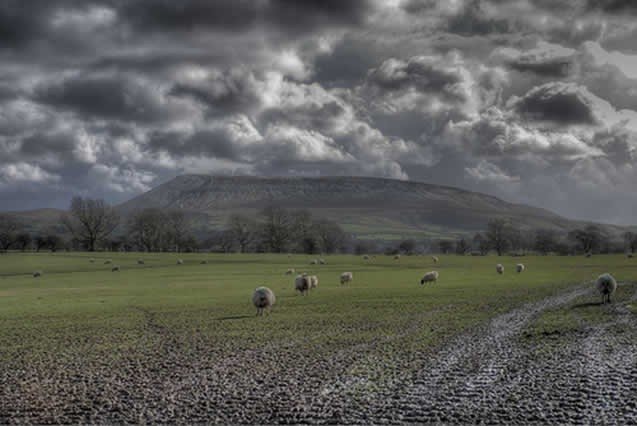