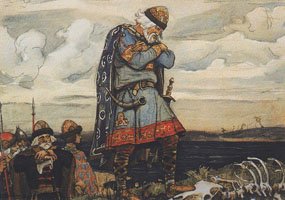 One night it so happened that Flosi struggled much in his sleep. Glum Hilldir's son woke him up, and then Flosi said—

"Call me Kettle of the Mark."

Kettle came thither, and Flosi said, "I will tell thee my dream".

"I am ready to hear it," says Kettle.

"I dreamt," says Flosi, "that methought I stood below Loom-nip, and went out and looked up to the Nip, and all at once it opened, and a man came out of the Nip, and he was clad in goatskins, and had an iron staff in his hand. He called, as he walked, on many of my men, some sooner and some later, and named them by name. First he called Grim the Red my kinsman, and Arni Kol's son. Then methought something strange followed, methought he called Eyjolf Bolverk's son, and Ljot son of Hall of the Side, and some six men more. Then he held his peace awhile. After that he called five men of our band, and among them were the sons of Sigfus, thy brothers; then he called other six men, and among them were Lambi, and Modolf, and Glum. Then he called three men. Last of all he called Gunnar Lambi's son, and Kol Thorstein's son. After that he came up to me; I asked him 'what news'. He said he had tidings enough to tell. Then I asked him for his name, but he called himself Irongrim. I asked him whither he was going; he said he had to fare to the Althing. 'What shalt thou do there?' I said. 'First I shall challenge the inquest,' he answers, 'and then the courts, then clear the field for fighters.' After that he sang this song—

"'Soon a man death's snake-strokes dealing
High shall lift his head on earth,
Here amid the dust low rolling
Battered brainpans men shall see:
Now upon the hills in hurly
Buds the blue steel's harvest bright;
Soon the bloody dew of battle
Thigh-deep through the ranks shall rise.'

"Then he shouted with such a mighty shout that methought everything near shook, and dashed down his staff, and there was a mighty crash. Then he went back into the fell, but fear clung to me; and now I wish thee to tell me what thou thinkest this dream is."

"It is my foreboding," says Kettle, "that all those who were called must be 'fey'. It seems to me good counsel that we tell this dream to no man just now."

Flosi said so it should be. Now the winter passes away till Yule was over. Then Flosi said to his men—

"Now I mean that we should fare from home, for methinks we shall not be able to have an idle peace. Now we shall fare to pray for help, and now that will come true which I told you, that we should have to bow the knee to many ere this quarrel were ended."