The Line of the Head - Palmistry for all - Cheiro

Only an extract for demonstration purposes 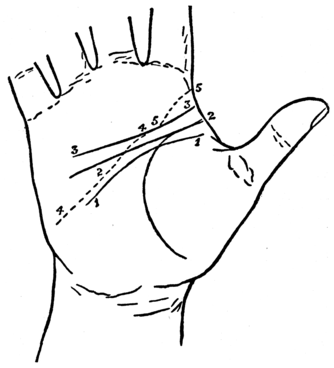 Palmistry for all - Cheiro

In all my work I regard the Line of Head  or the Line of Mentality as the most important sign that can be found in the hand.

A Line of Head is like the needle in the compass, without a true knowledge of which it is impossible to grasp the "direction of the subject." I have seen more mistakes caused by a lack of grasp of this point than by anything else.

I have seen, for example, many students make the mistake of paying great attention to what looked like a good Line of Sun or Success, and, at the same time, not noticing a weak, badly formed Line of Head, which contradicted the promise of success given by the various lines. If, on the other hand, the student had first noticed the Line of Head, he would have been able to tell the subject that the promise of success was not backed up by the intelligence or the mentality.

As regards the future being foreshadowed, it has been demonstrated that the brain is always growing, changing, increasing, or diminishing. These changes commence years before the effect is shown by the thoughts or actions of the individual. A boy ten years old may at that point commence a development which will not be felt until he is thirty, and then it may change his whole life and career.

As this development commences at ten, even at that age it has affected certain nerves, and they in their turn have already affected the Line of Head—a full twenty years before the point of change or action has been reached. It therefore follows that the future may be seen and told by a careful examination of the hand which, as Aristotle has said, is the "organ of all organs, the active agent of the passive powers of the entire system."........

The Line of Head is more frequently found connected with than separated from the Line of Life.  When the space is not very wide (3-3, Plate I.), it is an excellent mark to have, giving independence of thought, quickness of judgment, and a certain mental daring that is invaluable in fighting the battle of life.

When the Line of Head is at the same time lying fairly straight across the palm, such individuals have an immense power over others, but their capabilities are always more distinctly shown if they should in any form go in for some kind of public life. People possessing this mark are rather less "hard students" than those with the Line of Head and Line of Life joined together, but they have such brilliancy and quickness of thought that they seem to see in a flash that which takes the other class hard work to attain.

But these people with the "open Line of Head" must, above all things, have purpose in their life. Without purpose they are rather like a ship drifting on an idle sea. They may spend their life in an aimless way unless "the call" comes to them or the tide of ambition turns their way and carries them onward.