The Line of Destiny - Palmistry for all - Cheiro 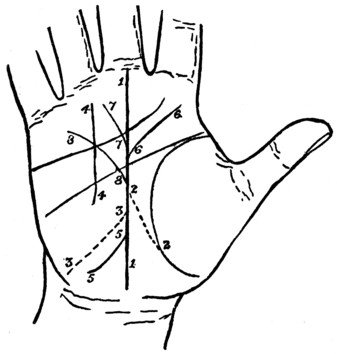 According to Cheiro if the line stops at the head line your intellect has thwarted your destiny.  Similarly with the heart.

THE LINE OF DESTINY OR FATE

The Line of Destiny, otherwise called the Line of Fate (1-1, Plate XI.) is naturally one of the most important of the principal lines of the hand.

Although one may never be able to explain why it is, this line undoubtedly appears to indicate at least the main events of one's career.

It may be found on the hand even at the moment of birth, clearly indicating the class of Fate or Destiny that lies in the far distant future before the individual.

In some cases it may look faint or shadowy, as if the path of Destiny were not yet clearly defined, while in other instances almost every step of the road is chiselled out with its milestones of failure or success, sorrow or joy, as the case may be.

That some human beings seem to be more children of Fate than others has been admitted by almost all thinkers, but why they should be so has been the great question that baffles all students of such subjects.

There are some who appear to have no Fate, and others who seem to carve their Destiny from day to day.

I have seen hundreds of cases where every step of the journey was indicated from childhood to the grave; others where only the principal changes in the career were marked in advance. There are, again, others where nothing seemed decided, and where the events indicated by the Line of Fate appeared to change from year to year.

The why and wherefore of such things may be impossible to fathom, but there are so many mysteries in Life itself that one more or less does not seem to matter.............