All Kings exert their power , not by being active like the Queen, but by being sedentary and commanding.  Thus you will find that whatever the suit, Kings are pictorially enthroned.  Even if they are not actually seated on a throne, they might be standing in front of it.

As any person, who had gained a certain level within the Mystery religions, was allowed to be seated, any seated figure whether the figure is one in the Ancient Egyptian system, or is in the Tarot or is in the Feudal system signified a certain level of achievement spiritually.  But Kings are more likely to be shown seated because like the King in chess, they have no need to move, their authority and charisma cause other people to move on their behalf. 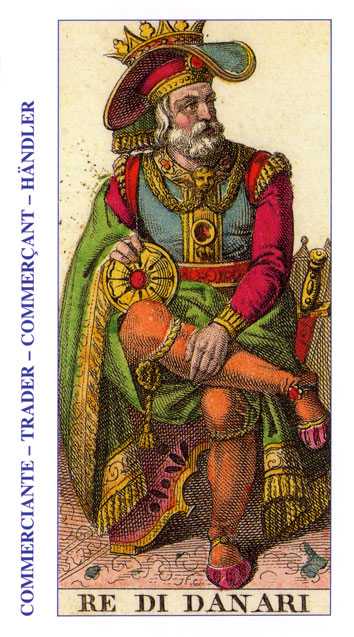 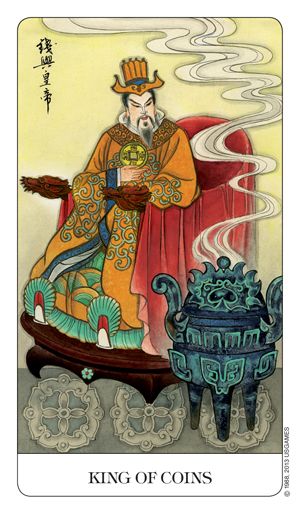 As we saw for the Queens, all the disk cards stand for the physical aspects of life—money, food, health, sustenance and sustainability.  Thus another archetype for the King is the hunter gatherer – the provider of the family – he who brings home the bacon!!

A positively inclined King of disks may, like the Queen, be described as ‘grounded’, practical and down to earth.  He may be protective to the entire family unit, big hearted and sociable, resourceful, and trustworthy. Within the animal kingdom, a big old Silverback gorilla with his group would classify as a King of Disks.

However, a King of Disks turned ‘bad’ becomes a sorcerer, possibly the most malevolent of the spiritually inclined and capable of great feats spiritually, but also great evil. 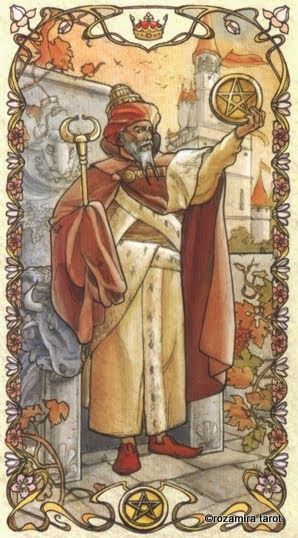 Sorcerors use death prayers.   And as A E Waite indicates, a sorcerer is connected with “Vice, ugliness, perversion, corruption, and peril.”

The figure calls for no special description. The face is rather dark, suggesting courage, but somewhat lethargic in tendency.  The bull’s head should be noted as a recurrent symbol on his throne. The sign of this suit is represented throughout as engraved or blazoned with the pentagram, typifying the correspondence of the four elements in human nature and that by which they may be governed.

Practically all the King of Disks cards, have a picture that links the King with his ‘earthiness’.    And as A E Waite coyly points out, he is also associated with the virility of the bull.  He is not monogamous, is highly sexed and a fighter – a literal often ruthless fighter, not a wordsmith.

There are links here with The Merovingian in the film of the Matrix, and the naming of Persephone in the film was no accident.  Described by the Oracle as "one of the oldest of us", the Merovingian lives an opulent, self-indulgent, wine and food filled life.   In the film, at the restaurant, the Merovingian secretly orders a dessert to be delivered to a woman sitting across from their table.  After one small bite, the woman has an orgasm and she has to excuse herself from her table.  This scene shows him to be a controller – a lover of power for power’s sake and also very effectively shows that many King of Disks like to exercise this power over women, and particularly in matters of sex.  Kings of Disks like to have women around them who are particularly beautiful, an acquisition like a car or yacht, a status symbol. 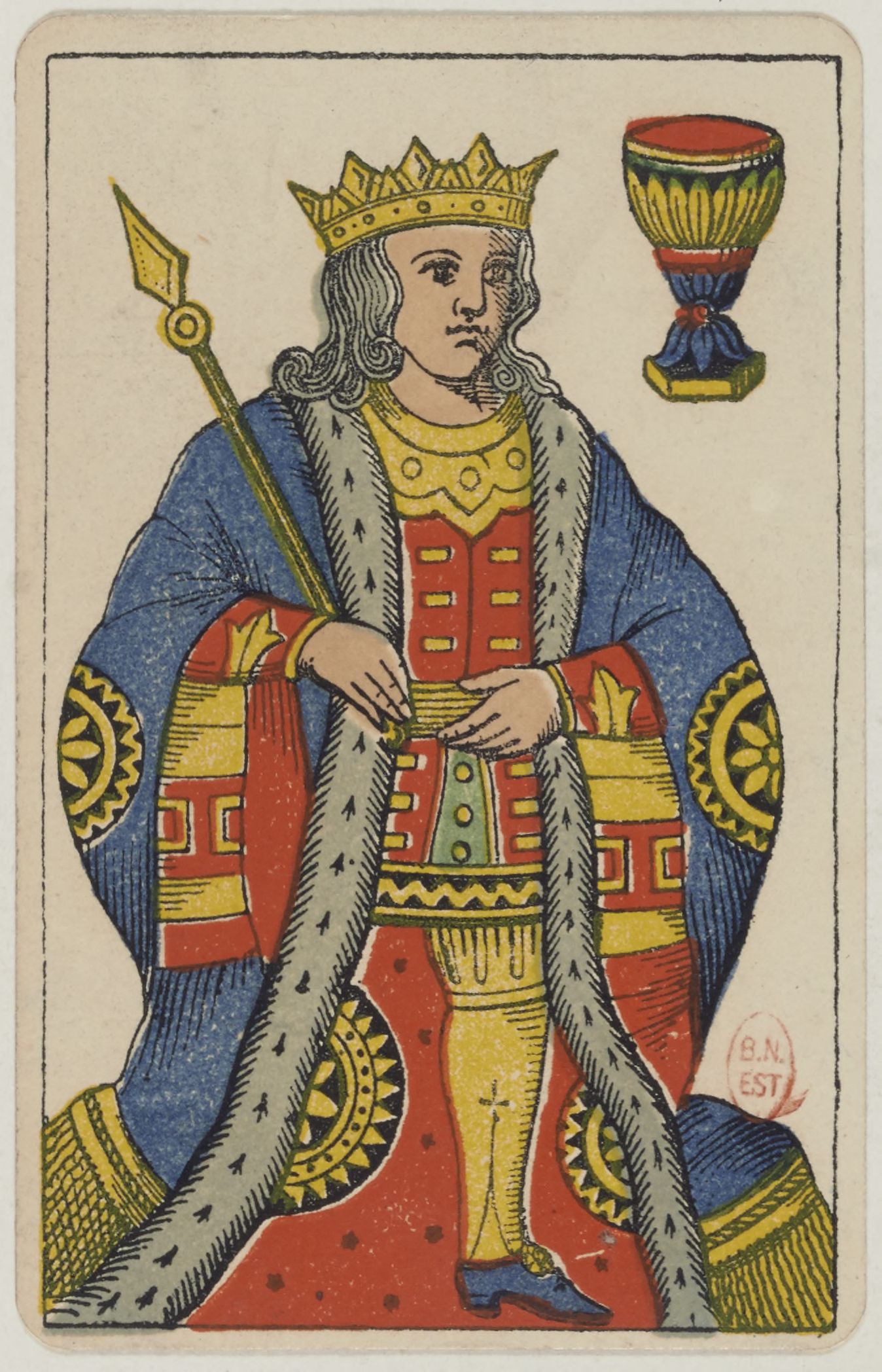 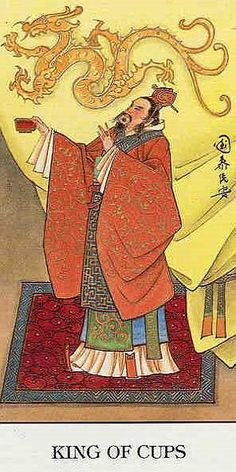 The King of Cups is almost the opposite of the King of Disks.  In some cards he even has an appearance of being androgynous.

He is certainly not ‘masculine’ in the way that the King of Disks is; if anything he has that arty look often seen in theatre producers, film directors or leading artists, or musicians.  A king indeed, but a dandy and an emotional one at that.  His counterpart the Queen at her most extreme is simply dippy and disorganised, all over the place.  The King isn’t, but he would certainly rather trust his feelings than his memory.  Reason is not his strong point.

The Greek archetype equivalent here would have been Bacchus or Dionysus.  Dionysus is the god of the grape-harvest, winemaking and wine, of fertility, ritual madness, religious ecstasy, and theatre in ancient Greek religion and myth. 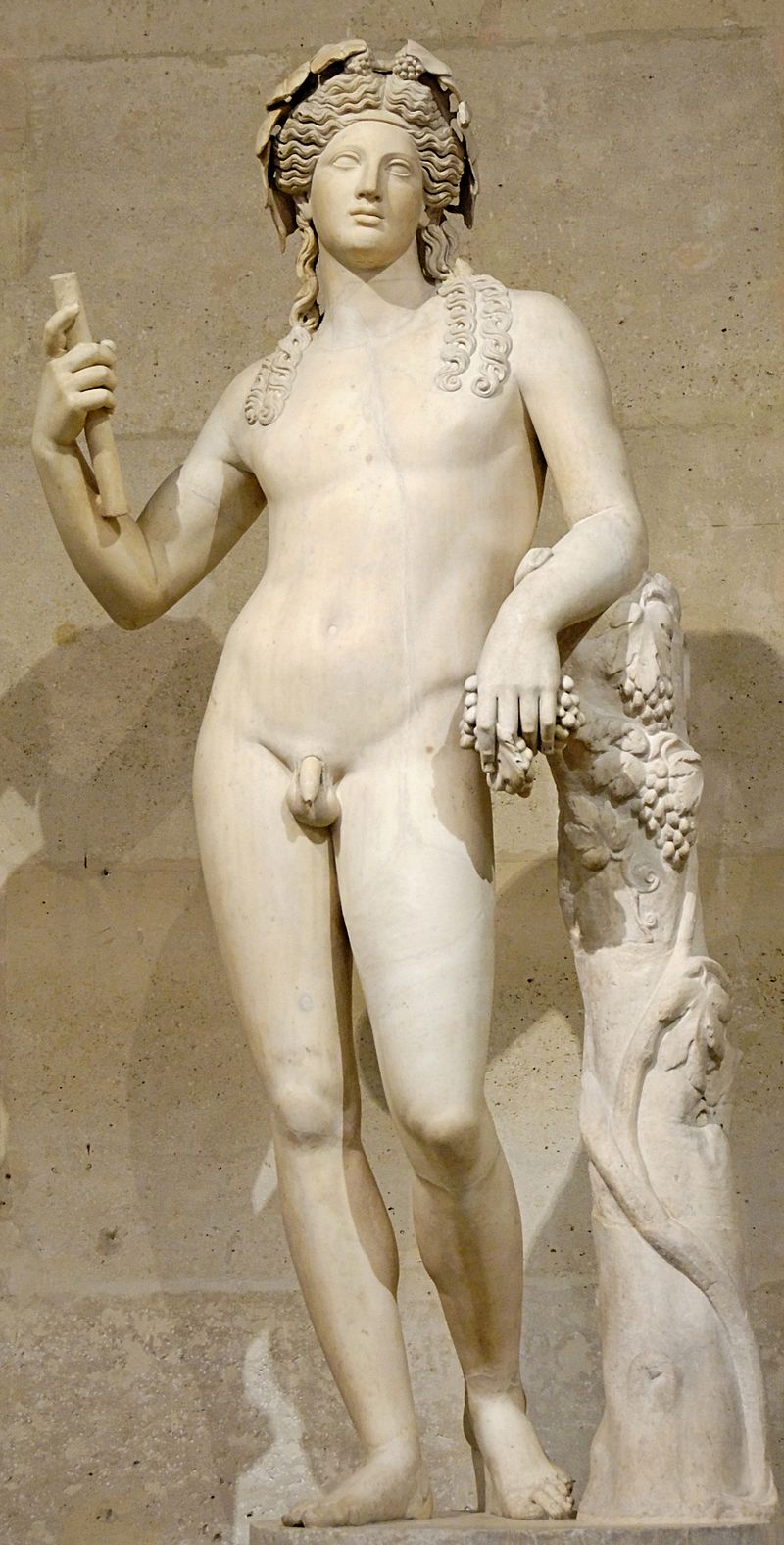 ‘Wine’ can be literal - meaning wine the drink – wine played an important role in Greek culture, and the cult of Dionysus was the main religious focus for its unrestrained consumption. 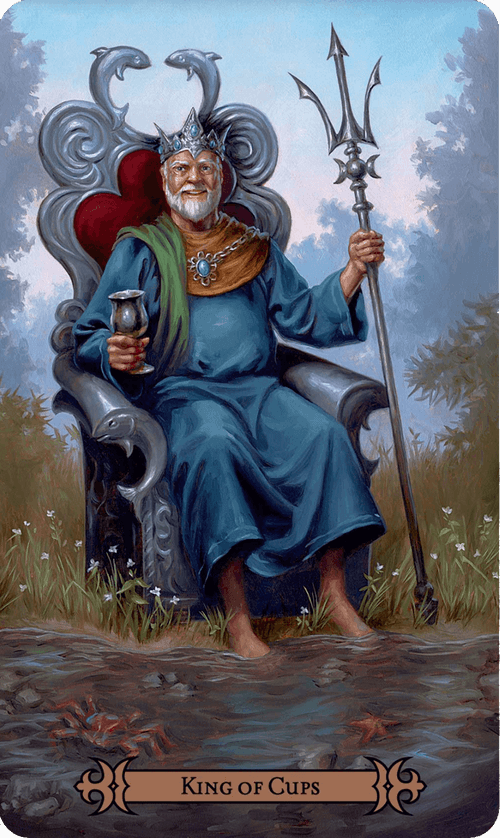 He holds a short scepter in one hand and a great cup in his other, his throne is set upon the sea, on one side a ship is riding and on the other a dolphin is leaping. The implicit is that the sign of the Cup naturally refers to water, which appears in all the court cards.

In other words the connections with Water are also eluded to as may be the symbols of Neptune or Poseidon.

At his worst he may be something of a prima donna.  The other kings may admire his artistic prowess, but are dismissive of anything else.
The scientists will be entirely dismissive - the king of 'woo', unless of course they go to see his films or enthuse over his operas, then we have a different reaction. 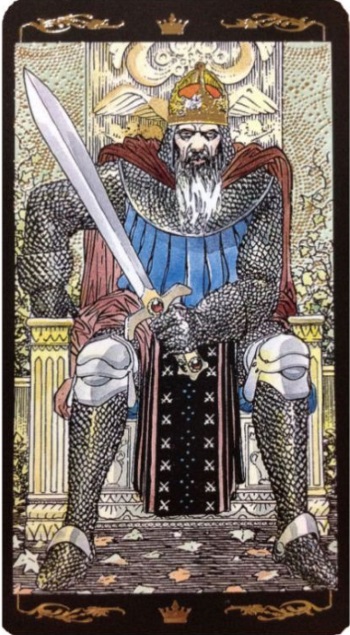 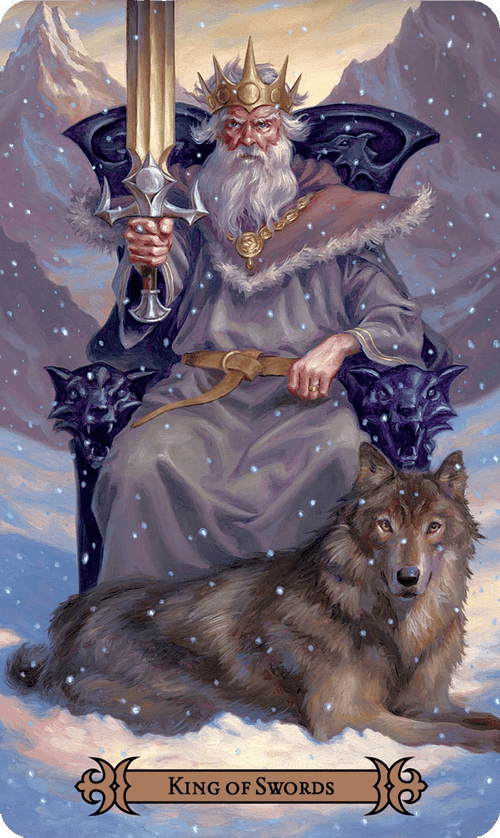 On the description of the Queen of Swords we saw that, in one of the cards, the Queen of Swords sits on a throne, her right hand raises the weapon vertically and the hilt rests on an arm of her royal chair the left hand is extended, and the overall impression given is one of a form of non violent punishment.  The hand is reaching out, but the sword is being used as a threat …. ‘or else’……This is punishment by the inciseful use of words – the power of words, not to belittle, but to ‘get to the point’.

The King of Swords is also an administrator of justice, but he isn’t threatening in the hope of change by persuasion, his sword means business.  In this respect he comes closer to the idea in ancient Greek religion of Nemesis, who in Ancient Greece was the goddess who enacted retribution against those who succumbed to hubris (arrogance before the gods). She was implacable justice and "the inescapable".  In the Tarot the goddess effectively spawns human male counterparts.  These folk.

In contrast, the Queen of Swords might be better thought of as an offspring of  the goddess Themis.  Themis was the goddess of divine order, fairness, law, natural law, and custom. Her symbols were the Scales of Justice, and in some Tarot cards, the Queen is shown holding the scales and the sword. Themis means "divine law" rather than human ordinance, literally "that which is put in place", from the Greek verb títhēmi (τίθημι), meaning "to put".  But this is not the King.  When the King manages to put his sword away and be more democratic and less threatening, his Greek archetype equivalents are Hermes/Mercury

He sits in judgment, holding the unsheathed sign of his suit, representing whatsoever arises out of the idea of judgment and all its connections—power, command, authority, militant intelligence, law, offices of the crown, and so forth.

Needless to say, when this level of justice goes wrong, all hell is let loose.  And we have Mars unleashed. 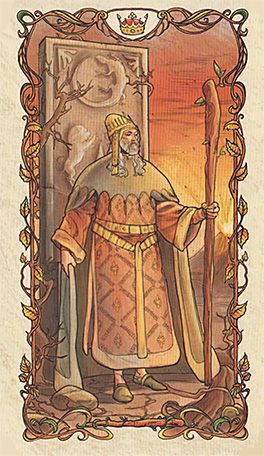 The physical and emotional nature to which this card is attributed is dark, ardent, lithe, animated, impassioned, noble. He uplifts a flowering Wand and wears, like his three correspondences in the remaining suits, what is called a cap of maintenance beneath his crown. He connects with the symbol of the lion, which is emblazoned on the back of his throne.

The King of Wands is the archetype that corresponds to Zeus.  Zeus (Greek: Ζεύς, Zeús [zdeǔ̯s]) is the sky and thunder god in ancient Greek religion, who rules as king of the gods of Mount Olympus. His Roman equivalent is Jupiter. His mythologies and powers are similar, though not identical, to those of Indo-European deities such as Indra, Jupiter, Perkūnas, Perun, and Thor.  Signs of wisdom.

King and Queen
Planets, the