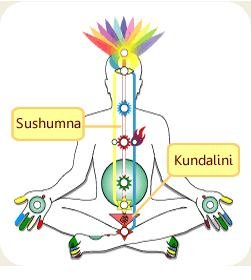 The rod of Asclepius ( sometimes also spelled Asklepios or Aesculapius), also known as the asklepian, is an ancient symbol associated with astrology, the Greek god Asclepius, and with medicine and healing.   It consists of a serpent entwined around a staff.  The name of the symbol derives from its early and widespread association with Asclepius, the son of Apollo, who was a practitioner of medicine in ancient Greek mythology. His attributes, the snake and the staff, sometimes depicted separately in antiquity, are combined in this symbol. 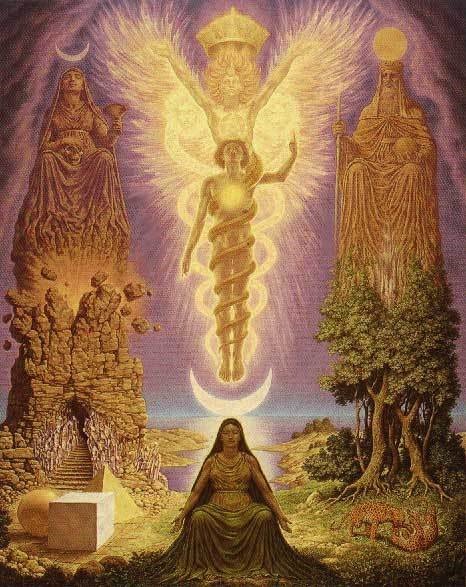 Duncan Jones - A Wee Guide to the Picts

The single straight rod is symbolically the ‘celestial pole’ which in turn represents the spinal column.

One way in which Annihilation [and rebirth] can be achieved is via the controlled flow of kundalini energy and this is usually shown diagramatically using two intertwining snakes.  We see this in the caduceus, which shows the spiralling of energy and the resulting meeting with [ecstasy] merging with [nirvana] or final take over by [annihilation] the Higher spirit. Two snakes simply represent the two types of enery Ida and Pingala.

But a single snake climbing up the celestial pole may be representative of Sushumna.

We have all the physical sensations in the kundalini experience embodied in the snake – the noises – hissing in particular, the undulating energy, or the zig zagging energy; and the terrible searing pain of its ‘venom’.

“Whether it is a constrictor or a venomous snake, it holds the figurative life or death of any captive in its power.  Thus snakes are indicative of the raw energy implicit in a kundalini experience – power in its most basic and perhaps terrifying form.” 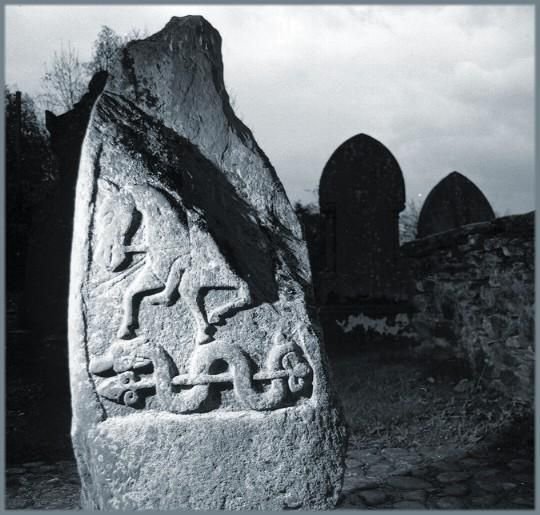 If found on a Pictish stone it signifies that the place indicated is used to invoke kundalini experiences.

As the snake can also represent the powers that are gained by a person who has undergone this experience, the snake with rod symbol, when found on a stone, is implying that by achieving a kundalini experience at this place one may gain the power to heal, the power to prophecy [hence the name of prophet – one who prophesies] and wisdom, obtained from the spiritual world as opposed to knowledge which is simply obtained by hard work

Kundalini is interpreted as a three and half times coiled serpent sleeping at the base of the spine. It signifies creative potential energy, which when awakened will move up along the spine upbraiding and purifying the 6 chakras on the way up to the crown chakra. It is the working of the energy of the glandular system combined with the nervous system to awake the brain towards total clarity. …. This kundalini needs the concentrated life force or prana to activate it. Prana is equivalent to Qi or Holy Spirit. Prana is the universal life force.

The progress through the six chakras – there is in fact a seventh, but it is unnamed and is not represented visually – may be regarded as analogous to climbing up the terraces of the ziggurat or mounting the steps pertaining to the seven metals in the mithraic ritual

The Alistair Crowley Tarot card shows this coiled serpent energy at the base of the spine – shown as a golden rod leading up to heaven in the top right of the card.  The goddess Kundalini has been ‘unleashed’ 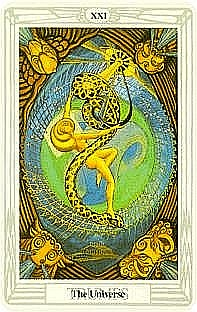 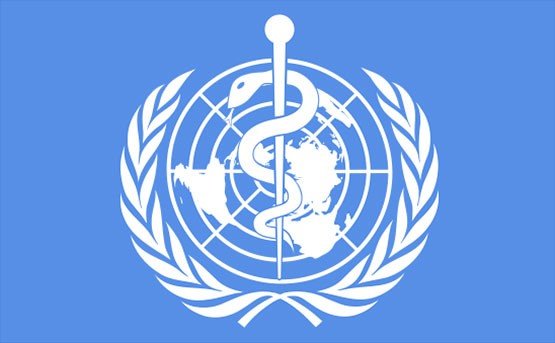