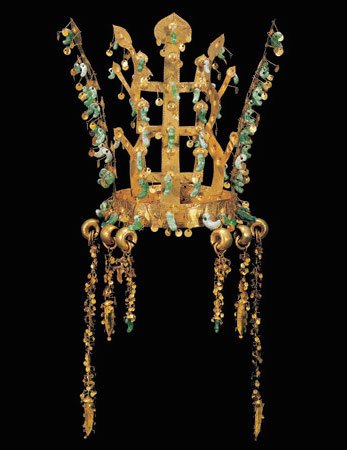 All that glitters was gold in ancient Korea. In the fifth and sixth centuries, the Korean peninsula was divided between three rivaling kingdoms. The most powerful of these was the Silla kingdom in the southeast of the peninsula. Chinese emissaries described the kingdom as a country of gold, and perhaps they had seen its crowns adorned with shimmering gold and jade.

Although their fragile gold construction initially led some to believe that these crowns were made specifically for burial, recent research has revealed that they were also used in ceremonial rites of the Silla royalty during the Three Kingdoms Period (57 B.C.E. - 676 C.E.). Prior to the adoption of Buddhism, Koreans practiced shamanism, which is a kind of nature worship that requires the expertise of a priest-like figure, or shaman, who intercedes to alleviate problems facing the community. Silla royalty upheld shamanistic practices in ceremonial rites such as coronations and memorial services. In these sacred rituals, the gold crowns emphasized the power of the wearer through their precious materials and natural imagery. 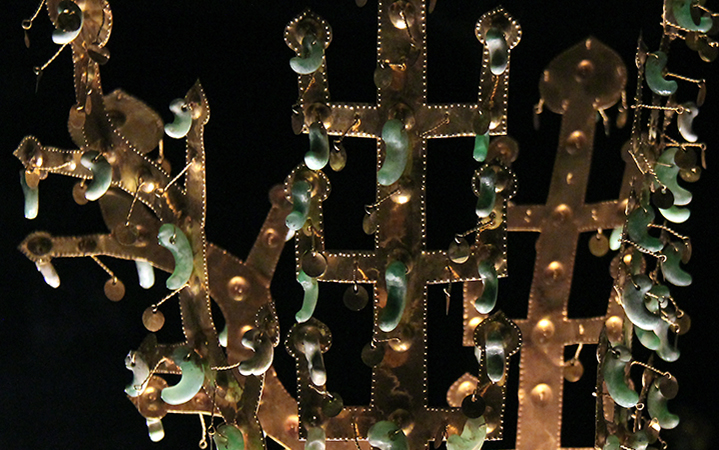 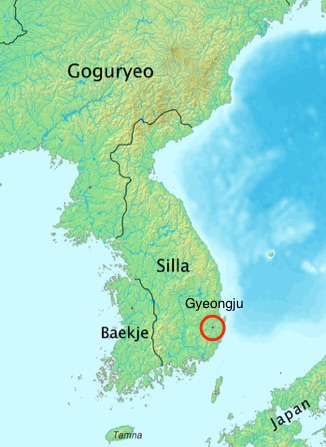 Worn around the forehead, this tree-shaped crown (daegwan) is the headband type found in the south in royal tombs at the Silla capital, Gyeongju. Between the fifth and sixth centuries, Silla crowns became increasingly lavish with more ornamentation and additional, increasingly elongated branch-like protrusions. In this crown, three tree-shaped vertical elements evoke the sacred tree that once stood in the ritual precinct of Gyeongju. This sacred tree was conceived of as a “world tree,” or an axis mundi that connected heaven and earth. Two additional antler-shaped protrusions may refer to the reindeer that were native to the Eurasian steppe that lies to the north of the peninsula. Attached to the branch-like features of the crown are tiny gold discs and jade ornaments called gogok. These jade ornaments symbolize ripe fruits hanging from tree branches, representing fertility and abundance. With sunlight falling on its golden discs, the crown must have been a luminous sight indeed. 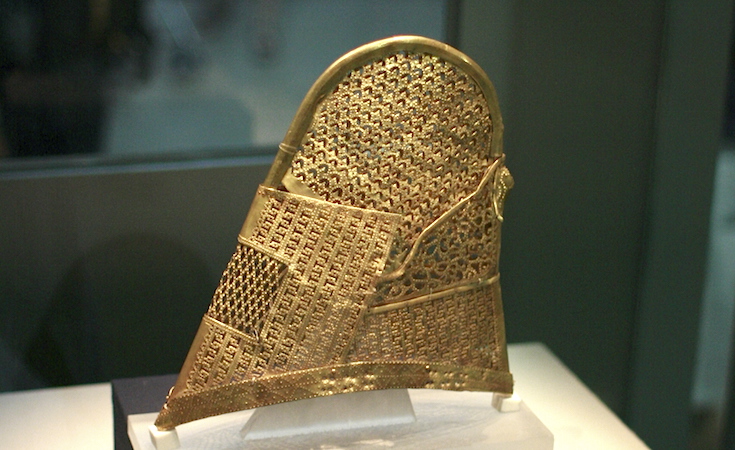 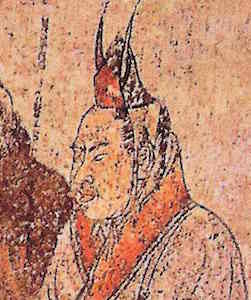 A second type of crown, the conical cap (mogwan), was found throughout the peninsula. Although it was initially thought to be an internal component of the headband crown, mural paintings show that it was worn independently over a topknot to proclaim the rank and social status of its wearer. The cap was secured to the head with double straps under the chin, as indicated by the small holes along either side of the cap. Appendages in the shape of wings, feathers, or flowers often were used to accessorize the crown, and those ornaments tended to be geographically specific to each kingdom.