Saint Brendan - A summary of his 'voyage'

St Brendan’s voyage is the story of a spiritual adventure and is symbolic from start to finish. This does not make his adventures fiction, he appears to have had, like many heroes, visions and out of body experiences in droves and thus the adventures were spiritually real. But they were not physically real. In essence, therefore St Brendan's voyage is a story of a spiritual journey. It took Brendan and his fellow monks seven years to complete – the seven is significant being equal to the number of Planets.

In the story they are “raised up on the back of sea monsters”, “pass by crystals that rose up to the sky”, and were “pelted with flaming, foul smelling rocks by the inhabitants of a large island on their route”. They finally arrived at the beautiful land they called “Promised Land of the Saints.” They explored until they came to a great river that divided the land.

The names of the islands describe his experiences: the Island of Delights, the Land of Promise and the Paradise of Birds. These are clearly not places on a chart or a map. They are part of Brendan's vision. With the help of this journey, with all that happens on the way, Brendan sees what life is for.

His faith is tested by these adventures, but grows stronger all the time. His life is made richer, more useful and more helpful to others. Thus like a number of books in this category, it is a description of one man's spiritual path.

...the Happy Island seems to be symbolic of …. paradise for most classic writers.... the island visited by St Brendan [had] a huge tree growing near a fountain, and on its branches lived many birds. Two rivers flowed across the island – one was the river of youth and the other that of death. Here we have the clearest possible example of landscape symbolism in which the terrestrial substance is integrated into cosmic pattern by means of the essential elements of traditional symbolism. 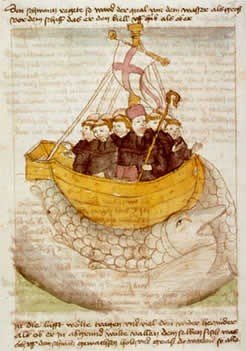 St Brendan is chiefly renowned for his legendary journey to The Isle of the Blessed as described in the ninth century Voyage of St Brendan the Navigator. Many versions exist, that tell of how he set out ……….searching for the Garden of Eden. ………… On his trip, Brendan is supposed to have seen St. Brendan's Island, a blessed island covered with vegetation. ……….. The most commonly illustrated adventure is his landing on an island which turns out to be a giant sea monster called Jasconius or Jascon.

Jasconius is an enormous fish in the story of Saint Brendan. Because of its size Brendan and his fellow voyagers mistake it for an island and land to make camp. They celebrate Easter on the sleeping giant's back, but awaken it when they light their fire. They race to their ship, and Brendan explains that the moving island is really Jasconius, who labors unsuccessfully to put his tail in its mouth.