For Stanley, the process of evolving a visionary painting worked as follows.

A scene, idea, or event which caught his attention (a 'light-bulb' moment, however minor) would settle into his memory as an image …. If he had time, he would make a quick sketch of the experience.

Because the 'light-bulb' moment - the perception - happened to him in the real world, that is, in his down-to-earth life, it could raise emotions for him. They might be of joy, of exultation, of bewilderment, of anger or even fear. But unlike most artists, Stanley preferred not to record their immediate impact or emotion …. Instead, Stanley kept the memory of the experience by him in the hope of later finding the means of transforming it - and importantly, redeeming any hurts it had given him - into the reassuringly-tranquil universal feelings of his up-in-heaven world. Always highly sensitive to atmosphere, his instinct was to transform the actuality-plus-emotion of the experience into a state of imaginative thought.

The resulting picture-making process thus became one of metaphysical transformation or metamorphosis.

For Stanley the most significant metaphysicalities were those which reveal the communal or coming-together aspects of our existence, those areas of life and thought in which we are in his term liked with our fellows, that is, made 'alike' (conscious of our collectivity or universality) while at the same time retaining our individual identity.

He saw our altruistic instinct to be liked with our fellows as a product of what he called the Love of God, manifested in each of us by our desire to love in all its varied aspects. The polarity between our universality [Higher spirit] and our self-regarding instinct for our own identity [ego/soul/personality]   formed the kinetic of much of Stanley's most valued visionary art. Whenever a picture had successfully replicated a down-to-earth experience in an up-in-heaven form for him, then he felt it had revealed a comprehension as a part, even if only a microdot, of our universality. 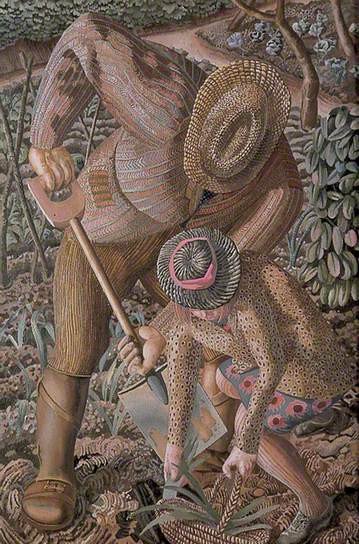