During World War One Spencer had begun to conceive of a chapel of peace and love in which to display his works and these ideas developed further while working at Burghclere. Eventually he developed a complete scheme of domestic and religious spaces mixing his love of Cookham with cycles of paintings illustrating sacred and profane love. The original lay-out of the Church-House would have mirrored the geography of Cookham with the nave based on the High Street, while School Lane and the path beside the Thames would be the aisles. In one version, Spencer envisaged the building would include bedrooms as chapels, fireplaces as altars and decorated bathrooms and lavatories while other versions of the scheme were more like an English parish church.

Although the structure was never built, Spencer continually returned to the project throughout his life and continued to paint works for the building long after it had become clear it would never be built. His original scheme included three sequences of paintings, two of which The Marriage of Cana and The Baptism of Christ were completed. The Turkish Windows,(1934), and Love Among the Nations,(1935), were designed as long friezes for the nave of the Church-House. Numerous other paintings were intended for the Church-House. These included the two paintings Spencer submitted for the 1935 Royal Academy Summer Exhibition, Saint Francis and the Birds and The Dustman or The Lovers. The Royal Academy rejected the two pictures, and Spencer resigned from the Academy in protest. The rejection of the Saint Francis picture must have been particularly galling for Spencer as the model for the figure of Saint Francis had been his own father, wearing his own dressing gown and slippers, which Spencer had intended to hang in the nave of the Church-House.

Saint Francis and the Birds 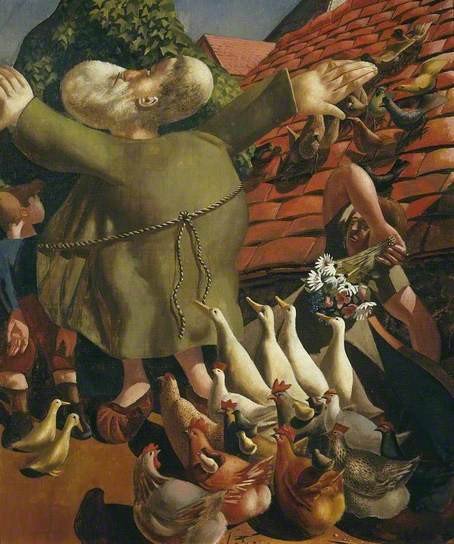