Spencer, Stanley - 1919 Travoys Arriving with Wounded at a Dressing Station at Smol, Macedonia

In 1919 Spencer was commissioned by the British War Memorials Committee of the Ministry of Information to paint a large work for a proposed, but never built, Hall of Remembrance. The resulting painting, Travoys Arriving with Wounded at a Dressing Station at Smol, Macedonia, September 1916, now in the Imperial War Museum, was clearly the consequence of Spencer's experience in the medical corps. He wrote,

"About the middle of September 1916 the 22nd Division made an attack on Machine Gun Hill on the Doiran Vardar Sector and held it for a few nights. During these nights the wounded passed through the dressing stations in a never-ending stream."

The dressing station was an old Greek church which Spencer drew such that, with the animal and human onlookers surrounding it, it would recall depictions of the birth of Christ, but to Spencer the wounded figures on the stretchers spoke of Christ on the Cross while the lifesaving work of the surgeons represented the Resurrection. He wrote,

"I meant it not a scene of horror but a scene of redemption." And also, "One would have thought that the scene was a sordid one...but I felt there was grandeur...all those wounded men were calm and at peace with everything, so the pain seemed a small thing with them." 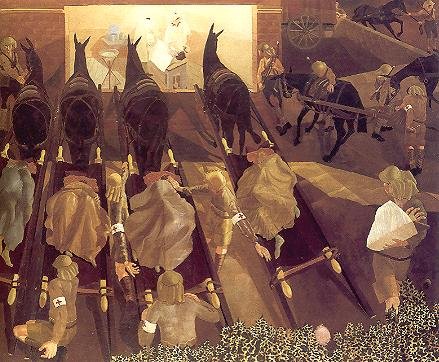