Shamans in Siberia ‘became’ the spirit of the animal who was their spirit helper, thus they perceived themselves to be a bird or wolf or reindeer.  This animal spirit helper then aided them in their healing, in their search for game or in their battles with other shamans.

Their clothes then reflected this affiliation and they would wear a bird feather cloak or antlers or a wolf’s pelt. 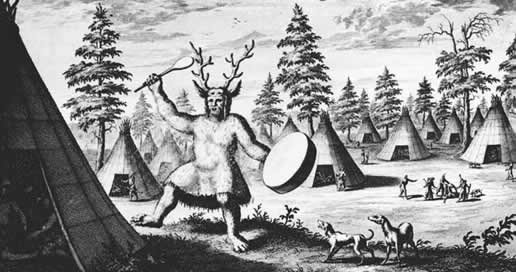 The earliest known depiction of a Siberian shaman, produced by the Dutch explorer Nicolaes Witsen,  who authored an account of his travels among Samoyedic- and Tungusic-speaking peoples in 1692. Witsen labelled the illustration as a "Priest of the Devil" and gave this figure clawed feet to highlight what Witsen perceived as demonic qualities.

That the Siberian shaman knew of kundalini energy can also be deduced from his coat and cap.

The shamanistic coat is characterized by a fringe round the sleeves a little above the opening, or round the neck a little below the collar. The fringe is an indication that he can ‘fly’ – go out of body as the fringe is a simulation of feathers.  Occasionally the shaman actually wore feathers.

Among the anthropomorphic personages depicted in the pre-Bronze and Bronze Age rock art from the Altai region, Tuva and Mongolia, there are frontal images of male and female figures wearing long, fringed coats with bands hanging down from the hands, arms, and sometimes from the sides, chest and hem. Most of these figures are shown with the raised hands typical of the ecstatic ; others are shown with extended hands, as if they are flying.

Besides the fringe there were slits ornamented with cured leather. 'These slits are said to represent curves and zigzags’ and these are like the lightning marks used by other cultures showing the energy pulsing up the arms, legs and spine – kundalini energy.

Alternative representations of the kundalini energy experienced by shamans can be found on shaman’s coats and include the very common snake motif.

The shamanistic cap is also supplied with fringes, but more importantly with a tassel on the top and a long double tassel on the left side.   The tassels are of the type adopted for magic purposes, that is, they are formed of alternating pieces of white and black fur.   Another cap with the opening on top, and likewise fringed and tasselled, was used by the shaman.  In effect we have here a symbolic representation of the crown chakra.

An alternative representation was a burst of feathers.

Rock art drawing from Mount Ukir (after Khoroshih, cited in Mikhailov 1987); showing the kundalini energy, the metal disc, the crown chakra and the drum

The Siberian shamans also used the concept of a crown – the ultimate spiritual experience in which the person has become a ‘god’.

Gmelin saw a costume of another old and revered female shaman near Selenginsk. Her costume was hanging in her yurta, but, according to her account, was not complete.
Among other things he mentions a box, full of strips of cloth, small stones and thunderbolts, which she used for magical purposes.

............The Buryat shaman's costume was first described by Pallas. It belonged to a female shaman, who was accompanied by her husband and two other Buryat, each of them holding a magical drum. She herself held in her hand two sticks, ornamented at the top end with a carving of a horse's head surrounded by small bells. …..From the back of the shoulders reaching to the ground hung about thirty snakes, made of white and black skin, in such a way that the snakes seem to be composed of white and black rings. One of the snakes was divided into three at the end, and was accounted indispensable to each Buryat female shaman. The cap was covered with an iron casque having horns with three branches, projecting on both sides like those of a deer.

In the exhaustive work of Agapitoff and Khangaloff there is a description of the old shaman costume among the Buryat-a costume of a kind which, however, is very rarely to be met with at present.

According to them, the coat (orgoy), the cap, and the horse-staves (morini-khörbö are the chief appurtenances of a shaman.