What is this little creature? She is swimming in the sea
Dolphin, porpoise? No, though small, it’s plain for all to see
She is a whale, there’s lots of signs to make me think it’s true
Though ‘tis certain from the size of her that she is not a blue

A humpback? No her curving back curves inwards and not out
A fin whale, or a minke? Well she has no fin to flout
No definitely not a rorqual she’s a species just like you
Though what that species is, for sure, I haven’t got a clue

This little mammal’s almost round, and’s plump with lots of blubber
She’s wallowing about so much, you really have to love her
She has two little flippers hanging just within my reach
Drooping gently pink and round with a barnacle on each

They say that looking in their eyes they almost seem quite human
[Though this one isn’t quite like that, perhaps she’s seen too few men]
And I can see her mouth is wide and filled with white baleen
[Or maybe they are dentures - gosh maybe I’m not so keen]

They say that all whales feed on krill, a small shrimp-like crustacean
Yup up to 1/2 a tonne of it, I can’t see the temptation
And some of them eat small fish too though this one smacks her lips
At battered fish with vinegar and oodles of fresh chips

If she grounds herself on beaches I’ll rush in and help her out
I’ll massage her with sun oil to keep her skin from drying out
And this whale has a complex "song" - bit like the hokey kokey
She says she learnt it from the days when she did karaoke.

She’s diving splashing, breaching and she’s frolicking about
A creature in her element of that there is no doubt
A strange and rather shapely whale, I’m not sure what to think
And I’m not sure about Greenpeace, ‘cos the piece I see is pink

She has a quite delicious fluke even though its rather plump
I can just imagine holding it and giving it a pump
Aaah little whale, aaah little whale a swimming in the sea
Just stop your gentle frolicking and spare a thought for me

And there !!! across the dapply waves I see a massive spout
And can say on this occasion it would be better in than out
Aaah little whale, aaah little whale you’ve taken up my heart
Enraptured by the silvery spray from that enormous fart

I’ll protect her from Norwegians if there’re any round about
And the naughty men from Iceland who may be attracted by that spout
And I’ll get the help of Wildlife funds, the Worldwide one is best
To save her yes I’ll save her, though t’will be a knotty test

Is she seeking out a sperm whale? Well I’d give her her prescription
Though to be honest spermy male might be the best description
So nuts to wildlife activists with cries of ‘Save the Whale’
I’m getting my harpoon out ‘cos this female’s found a male. 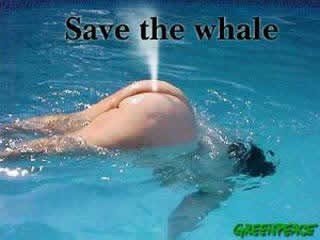