This shows he did not understand.

Third Revelation: The Cosmic Correspondences of the Vattanian Alphabet 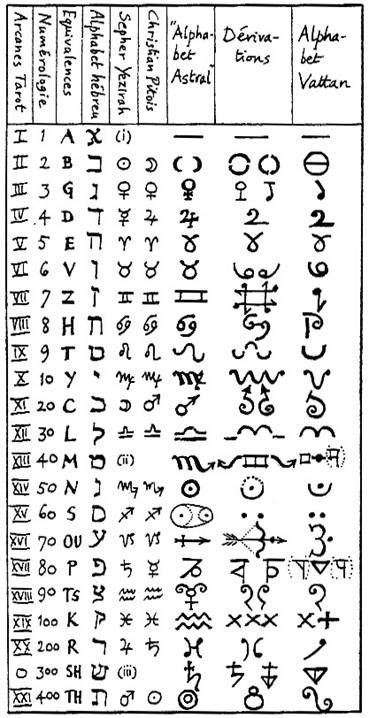 For his first attempt to align the 22 Vattanian letters with the cosmic archetypes, Saint-Yves naturally referred to the Sephir Yetzirah, where the Hebrew alphabet is divided into groups of 3, 7, and 12 letters, the last two categories corresponding to the seven Chaldean planets and the twelve signs of the zodiac.

There remain three “mother letters,” A, M, and Sh (see Table 2, left-hand columns). Saint-Yves wrote this system down in his “Hermetic Notebook,” where the corners of the pages are signed with Haji Sharif’s monogram, denoting the guru’s approval. But the pupil was not satisfied.

From a note in the same notebook, it appears that Saint-Yves was currently—like many others—consulting the History of Magic of “Paul Christian” (actually the historian J.-B. Pitois). In that book there is another system of correspondences for the planets and zodiacal signs. In a context of practical astrology, but without giving any source, Pitois aligns them with the 22 major arcana of the Tarot, which he recognizes as also correlating with the Hebrew alphabet.

Saint-Yves adopted the letter-equivalences of the first twelve planets and signs (see Table 2). But he had only to read the titles that Pitois gives to the arcana to think up a better arrangement from the thirteenth letter onwards.

For number 14, the “solar genius,” why not the Sun itself? And the 15th, “Typhon, genius of catastrophes,” fits very well with the symbol of duality, the primordial source of evil. The “crocodile” of Arcanum 0 could be the serpent that devours time, thus Chronos or Saturn. Whatever his reasonings, Saint-Yves arrived, after a few pages, at a new and definitive system which would become that of the Archeometer (see columns 4-7 of Table 2)

The very shapes of the traditional symbols seemed to confirm his choices, as shown in a large leaf, drawn by a professional hand, found among the papers concerning the publication of L’Archéomètre by the Friends of Saint-Yves. This leaf was doubtless intended to take its place in the finished work. It comprises three columns, titled “Vattanian alphabet,” “Derivation,” and “Astral alphabet.” These derivations were presumably arrived at as a speculative exercise by Saint-Yves, perhaps with Haji Sharif’s collaboration.

The reader can judge their validity (see Table 2, columns 6-9), keeping in mind that the derivation goes from right to left; the signs of the zodiac and planets are supposed to have been derived from the primordial letters of Vattan.

Saint-Yves played with these materials for a few months—one cannot say much more than that. He filled about forty pages of his Hermetic notebook with alphabets, herbal recipes, messages in code, all rather more magical than Hermetic in content. In the course of these pages, Haji’s monogram gets more and more cursory, then, in the middle of a section on “Botanical magic,” it disappears entirely. Perhaps one can see in this the process of the guru’s disillusionment to which several commentators have alluded.

Elements
Hebrew alphabet, the
Planets, the
Signs of the Zodiac