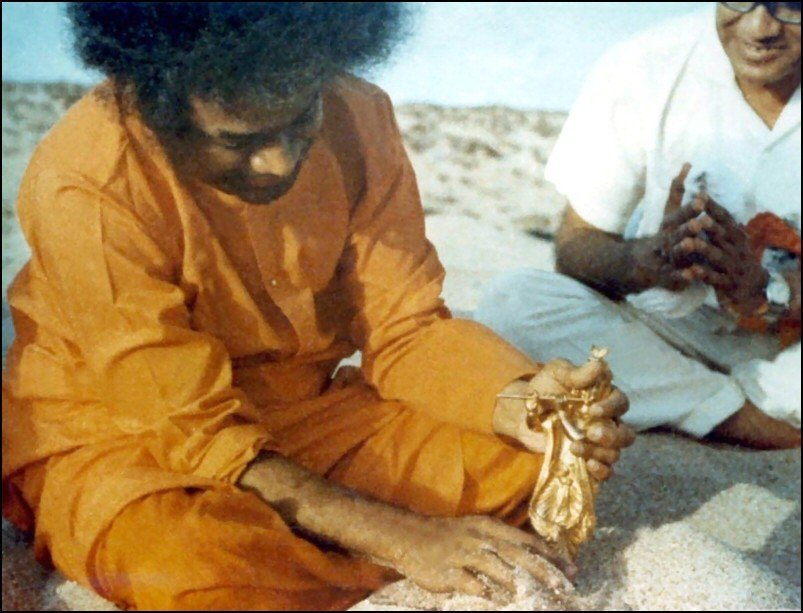 A few miles from circuit House the car, and several other vehicles following it, stopped by the roadside. We all got out and went to a patch of sand some fifty yards away which had been seen from the road on an earlier journey.

Baba asked the young men in the party to make him a sand platform, so they scraped and pushed the sand with their hands to build a flat stage about a foot high and four feet square. Baba sat cross-legged in the middle of this and the party clustered in a semi-circle around him. I was in the front row of the spectators, right at the edge of the sand platform. The thought passed through my mind that if any object had previously been buried here, near where Baba was sitting, he would have to dig down more than a foot through the newly-piled sand to reach it.

He began as usual with a spiritual discourse which, apparently, always has the effect of harmonising and purifying the psychic atmosphere around. Maybe this is a necessary preparation for the miracles.

Then with his forefinger he made a drawing on the surface of the sand just in front of him, and asked me what it was. From where I sat it looked rather like a human figure, and I told him so.

Laughing, and with the expression of a happy child playing on a beach, he scooped up the sand to form a little mound above the drawing about six inches high. Still with an air of happy expectation he put his fingers lightly into the top of the mound, perhaps an inch down, and drew out, head first, a silvery shining figure, like the drawing he had made. It was a statue of the god Vishnu, about four inches in height.

He held it up for everyone to see, then put it to one side, smoothed out the mound before him to make a flat surface again, and began once more to discuss spiritual topics.

Soon he made another drawing in the sand on the same spot as before. Again he scooped sand over it, making a mound - a wider flat-topped one this time. Again with a happy chuckle he felt with his finger-tips into the top of the mound and scraped a little sand away; less than an inch down was a photograph. He pulled it out, shook the yellow grains away, and held it up for us to see. It was a glossy black-and-white print, about ten inches by eight.

He passed it around for some of us to look at closely, and later I examined it at leisure back at our quarters. It was a photograph of the Hindu gods and avatars, standing in two rows to form a forward-pointing arrowhead, with Lord Krishna in the foreground at the tip. Heads of Satya Sai Baba and Shirdi Baba could be seen as small inserts on the body of Krishna. This print, I felt, was not produced in any earthly studio. Baba later gave it to Mr. and Mrs. T. A. Ramanatha Reddy, our hosts. It stood with the unearthed statue of Vishnu for some days on a side table in the dining room at Circuit House.