This song was written by Brian Jones with help from Keith Richards.  Brian Jones composed the melody. Or at least, the major idea of it. Keith was probably the one to compose the lyrics or most part of it. They were both missing Linda Keith [Below, Brian with Linda in 1967]. 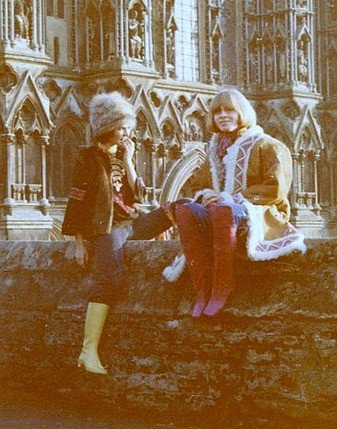 According to Mick Jagger:  "It's just a nice melody, really. And a lovely lyric. Neither of which I wrote, but I always enjoy singing it." as told to Jann Wenner in 1995.

"I think in Brian's state writing a song probably wasn't possible. He could only do it through another medium, through Keith. I guess the closest he came to it was 'Ruby Tuesday', where his melancholy recorder wistfully carries that sense of irretrievable loss. 'Ruby Tuesday' was a collaboration between Keith and Brian. it's one of the few cases where Mick had nothing to do with a Stones song, neither with the lyrics nor the melody - but he and Keith got the writing credit. Without Brian, there wouldn't be a 'Ruby Tuesday"

"In one of the most telling episodes in Faithfull, her autobiographical collaboration with David Dalton, Marianne describes the moment in the studio when Jones first plays on recorder the beautiful lilting pastoral melody that would eventually become 'Ruby Tuesday'. Richards picks up on it and starts shaping it on the piano. Jones tells him that it's a cross between John Dowland's 'Air On The Late Lord Essex' and a Skip James blues. "Brian wanted everyone to say, 'That's great Brian, wonderful! Good work!'" says Faithfull. "But of course nobody did." When it was released, as the flip side to 'Let's Spend The Night Together', 'Ruby Tuesday' carried the standard Jagger-Richards songwriting credit. When they performed it on TV, Jones and Richards were sat together at the same piano stool, accentuating their physical and musical closeness. They would never be that close again." Rob Chapman

Goodbye, Ruby Tuesday
Who could hang a name on you?
When you change with every new day
Still I'm gonna miss you...

There's no time to lose, I heard her say
Catch your dreams before they slip away
Dying all the time
Lose your dreams
And you will lose your mind.
Ain't life unkind?

Goodbye, Ruby Tuesday
Who could hang a name on you?
When you change with every new day
Still I'm gonna miss you...