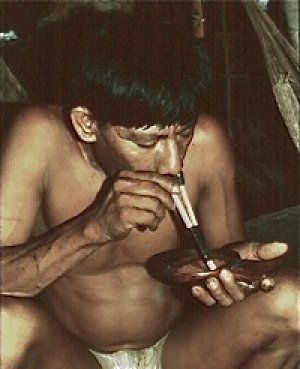 Vomiting is the equivalent in this context to fasting, it is done so there is no mixture of bridges in the body

….an aspect of the power of "penetration" is the capacity to enter into a trance and to undertake the magical flight that permits the paye to leave the biosphere and penetrate to another existential plane.

A paye is at bottom a specialist in developing this rupture of levels in a spatial, ecstatic sense as well as in the sense of passing from one conceptual unit of time to another; ecstasy is equivalent to death and is, therefore, a process of acceleration of time………

The apprenticeship [of a paye] lasts some six months or longer, during which the paye communicates to the apprentice the invocations, the myths referring to the Creation of the IJniverse, and the genealogies of the sibs and phratries. Also, after three or more months, the neophyte practices the use of hallucinogenic drugs, and together they sniff the powder of viho and drink yaje.

Using a long tube, the paye blows the powder into the nostrils of his pupil, communicating to him not only the snuff but also the power to have visions. At the same time the paye teaches him to consume only certain foods and to avoid such others as fried fish, monkey meat, or any meat that is well roasted or smoked, because the odour of smoke (other than tobacco) or of roast is considered impure.

The apprentice must practice sexual abstinence and rise at night to go alone to bathe in the river; there he must sniff in an infusion of liquid chili through his nostrils by means of a small leaf funnel, and he must take emetic plants to vomit…………

In order to establish contact with supernatural beings, the paye uses the hallucinogenic powder of viho.  The word is derived from vihiri/to sniff or to inhale, because the powder is absorbed through the nose by means of a small v-shaped bone.

All supernatural contacts are effected through Viho-mahse, who, also in a hallucinatory state, wanders over the Milky way, over his "road" (viho-mahse ma'a). The ability to have visions by means of viho and the power of establishing this contact determine the potential capacity of a paye. A paye ought to view the Milky way as a road, the hills and pools as malocas, and animals as persons. Those who do not react in this manner to the hallucinogenic drug see only clouds and stones, and “the birds laugh at them." In their trance they tear off their loincloths and walk around naked, without shame; they even urinate or defecate in public.

But others, the truly experienced payes, control these impulses, they are transported to the Milky Way or to the "houses" of the hills or the waters, and there they talk and negotiate with the beings occupying these places. Then they return and rejoin their bodies that meanwhile have remained in their hammocks as if asleep.

When he takes vijo, the paye enters into the state of venturi, which takes him to the blue zone where he meets viho-mahse. The latter, however, is only an intermediary, and it is through him that the paye meets with Emekori-mahse, Diroa-mahse, and Vai-mahse.

Viho-mahse is an amoral entity, and the paye can solicit from him good or evil: he can kill persons by sending an illness to them, or he can cure them of their afflictions. Viho-mahse is indifferent in these cases because he only serves as a link to establish communication with the winds and currents of the blue zone…………

The payes arrange to meet in their hallucinatory trances and discuss the needs of each one. During these negotiations, it is imagined that the payes, Vai-mahse, and the game animals drink yaje, sing, and dance. The image is that of a friendly reunion, but at the same time it is concerned with obtaining advantages. It is said that sometimes violent quarrels break out among various payes because each one tries to get the better of the others.

Enclosed in a small cubicle formed by mats, within the maloca of the hills, the payes discuss matters in an agitated manner; sometimes, to punish one who is particularly recalcitrant, they leave him to himself. Then a great noise is heard as if an immense door were closing.  Only if the captive paye has very great power can he save himself from this situation; in such cases a small hole opens in the wall, such a tiny hole that only by converting himself into a flea can the paye escape.