I have shown what Jarvis looks like below, the maps and picture are from Google maps. 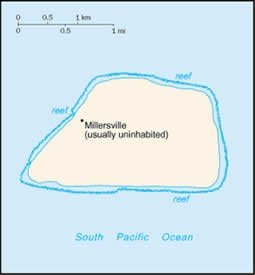 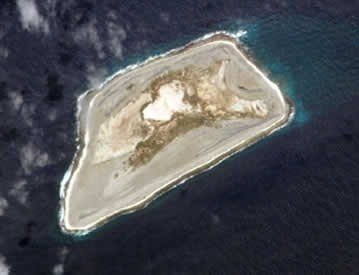 Fred Rebell – Escape to the Sea

The next night I had another [out of body experience]……  This time I was floating in the air about half a mile above the surface of the sea, at a point about fifty miles east of my boat and five miles south of it. Looking to the south from my vantage-point, I could see as clearly as by day a small coral island, oval in shape, with an under-water reef projecting from it in a north-Easterly direction. There was some stunted growth on the island. -The sea-ripple seemed wonderfully realistic: and I could see rollers breaking heavily on the eastern side: round the reef itself there was comparative calm, and a landing might have been effected on either side of it.

That island I never saw. I have no means of knowing whether it resembles Jarvis Island or not; for I never saw Jarvis Island. Perhaps some other seafarer, who reads this passage will some day be able to enlighten me.

The [experience], however, left me positive that I was getting close to the island: and that it lay at about the distance and direction I had ‘dreamed’. Being so close, I had to be on guard lest I run into it in the night. - But squally weather had set in now, alternating with calms, which made progress difficult for a sailing-boat: and the situation was further complicated by the powerful ocean currents which wash back and forth across the Equator.

As I  was ignorant of my longitude and dependent for knowledge of my latitude on noon sights of the sun, and the sun was at that time so often hidden in a rain-squall; and since I could not sail by dead-reckoning because I did not know the force and direction of the currents, it was exceedingly difficult for me to be at all certain of finding Jarvis.

The only indication upon which I could depend with any reliance was the evening flights of the seabirds; and on the evening of 1st July, after a day of fierce sailing through heavy squalls, I observed that these birds no longer flew eastward,  but were wending their way home to the southward. Plainly, therefore, I had passed Jarvis.

Just before sunset, however, through a rift in a bank of mist, I saw what might have been land lying some four miles to the south-west.  If that was land I did not want to charge into it in the darkness: so I lowered the mainsail and trusted to the slight easterly drift to carry me close within sight of it by dawn.

When dawn came, however, there was no land to-be seen.