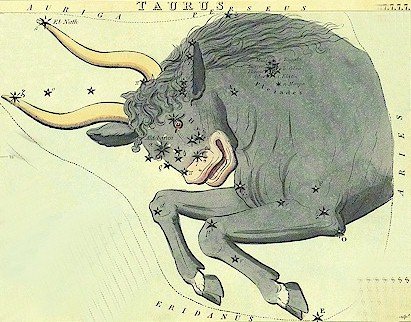 Taurus (Latin for "the Bull") is one of the constellations of the zodiac, which means it is crossed by the plane of the ecliptic. Taurus is a large and prominent constellation in the northern hemisphere's winter sky. It is one of the oldest constellations, dating back to at least the Early Bronze Age when it marked the location of the Sun during the spring equinox. Its importance to the agricultural calendar influenced various bull figures in the mythologies of Ancient Sumer, Akkad, Assyria, Babylon, Egypt, Greece, and Rome.

A number of features exist that are of interest to astronomers. Taurus hosts two of the nearest open clusters to Earth, the Pleiades and the Hyades, both of which are visible to the naked eye. At first magnitude, the red giant Aldebaran is the brightest star in the constellation. In the northwest part of Taurus is the supernova remnant Messier 1, more commonly known as the Crab Nebula. One of the closest regions of active star formation, the Taurus-Auriga complex, crosses into the northern part of the constellation. The variable star T Tauri is the prototype of a class of pre-main-sequence stars.

Signs of the Zodiac
TAURUS