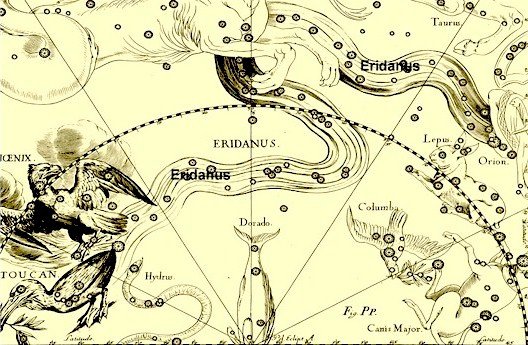 At its southern end is the magnitude 0.5 star Achernar, designated Alpha Eridani. 144 light-years from Earth, it is a blue-white hued main sequence star whose traditional name means "the river's end". Achernar is a very peculiar star because it is one of the flattest stars known. Observations indicate that its radius is about 50% larger at the equator than at the poles. This distortion occurs because the star is spinning extremely rapidly.

Epsilon Eridani is a star with one extrasolar planet similar to Jupiter. It is an orange-hued main-sequence star of magnitude 3.7, 10.5 light-years from Earth. Its one planet, with an approximate mass of one Jupiter mass, has a period of 7 years