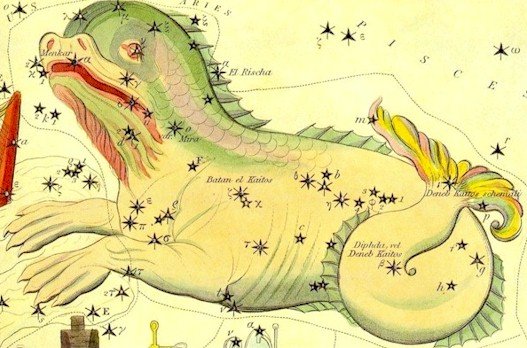 Cetus is a constellation. Its name refers to Cetus, a sea monster in Greek mythology, although it is often called 'the whale' today. Cetus is located in the region of the sky that contains other water-related constellations such as Aquarius, Pisces, and Eridanus.

Although Cetus is not generally considered part of the zodiac, the ecliptic passes less than a quarter of a degree from its constellation boundary, and thus the moon, planets, and even part of the sun may be in Cetus for brief periods of time. This is all the more true of asteroids, since their orbits usually have a greater inclination to the ecliptic than the moon and planets. For example, the asteroid 4 Vesta was discovered in this constellation in 1807.

As seen from Mars, the ecliptic passes into Cetus, with the sun appearing in Cetus for around six days shortly after the northern summer solstice. Mars's orbit is tilted by 1.85° with respect to Earth's.

Mira ("the Wonderful"), designated Omicron Ceti, was the first variable star to be discovered and the prototype of its class. Over a period of 332 days it reaches a maximum apparent magnitude of 3 - visible to the naked eye - and dips to a minimum magnitude of 10, invisible to the unaided eye. Its seeming appearance and disappearance gave it its common name, which means "the amazing one". Mira pulsates with a minimum size of 400 solar diameters and a maximum size of 500 solar diameters. 420 light-years from Earth, it was discovered by David Fabricius in 1596.

AA Ceti is a triple star system; the brightest member has a magnitude of 6.2. The primary and secondary are separated by 8.4 arcseconds at an angle of 304 degrees. The tertiary is not visible in telescopes. AA Ceti is an eclipsing variable star; the tertiary star passes in front of the primary and causes the system's apparent magnitude to decrease by 0.5 magnitudes. UV Ceti is an unusual binary variable star. 8.7 light-years from Earth, the system consists of two red dwarfs. both of magnitude 13. One of the stars is a flare star, which are prone to sudden, random outbursts that last several minutes; these increase the pair's apparent brightness significantly - as high as magnitude 7.