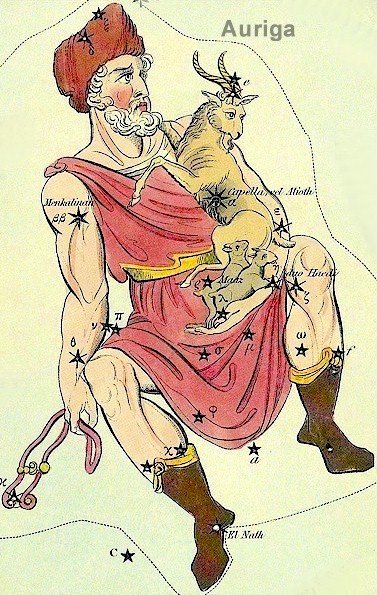 Auriga is one of the 88 modern constellations; it was among the 48 constellations listed by the 2nd-century astronomer Ptolemy. Located north of the celestial equator, its name is the Latin word for "charioteer", associating it with various mythological charioteers, including Erichthonius and Myrtilus. Auriga is most prominent during winter evenings in the northern Hemisphere, along with the five other constellations that have stars in the Winter Hexagon asterism. Because of its northern declination, Auriga is only visible in its entirety as far as 34° south; for observers farther south it lies partially or fully below the horizon. A large constellation, with an area of 657 square degrees, it is half the size of the largest constellation, Hydra.

Its brightest star, Capella, is an unusual multiple star system among the brightest stars in the night sky. Beta Aurigae is an interesting variable star in the constellation; Epsilon Aurigae, a nearby eclipsing binary with an unusually long period, has been studied intensively. Because of its position near the winter Milky Way, Auriga has many bright open clusters in its borders, including M36, M37, and M38, popular targets for amateur astronomers. In addition, it has one prominent nebula, the Flaming Star Nebula, associated with the variable star AE Aurigae.

In Chinese mythology, Auriga's stars were incorporated into several constellations, including the celestial emperors' chariots, made up of the modern constellation's brightest stars. Auriga is home to the radiant for the Aurigids, Zeta Aurigids, Delta Aurigids, and the hypothesized Iota Aurigids.