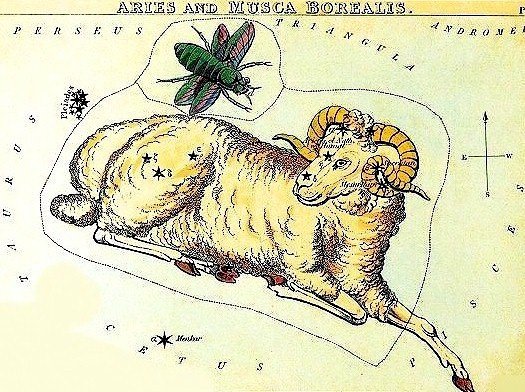 Aries is one of the constellations of the zodiac. It is located in the northern celestial hemisphere between Pisces to the west and Taurus to the east. The name Aries is Latin for ram, and its symbol is

(Unicode ♈), representing a ram's horns. It is one of the 48 constellations described by the 2nd century astronomer Ptolemy, and remains one of the 88 modern constellations. It is a mid-sized constellation, ranking 39th overall size, with an area of 441 square degrees (1.1% of the celestial sphere).

Although Aries came to represent specifically the ram whose fleece became the Golden Fleece of Ancient Greek mythology, it has represented a ram since late Babylonian times. Before that, the stars of Aries formed a farmhand. Different cultures have incorporated the stars of Aries into different constellations including twin inspectors in China and a porpoise in the Marshall Islands. Aries is a relatively dim constellation, possessing only four bright stars: Hamal (Alpha Arietis, second magnitude), Sheratan (Beta Arietis, third magnitude), Mesarthim (Gamma Arietis, fourth magnitude), and 41 Arietis (also fourth magnitude). The few deep-sky objects within the constellation are quite faint and include several pairs of interacting galaxies. Several meteor showers appear to radiate from Aries, including the Daytime Arietids and the Epsilon Arietids.

ARIES
Signs of the Zodiac